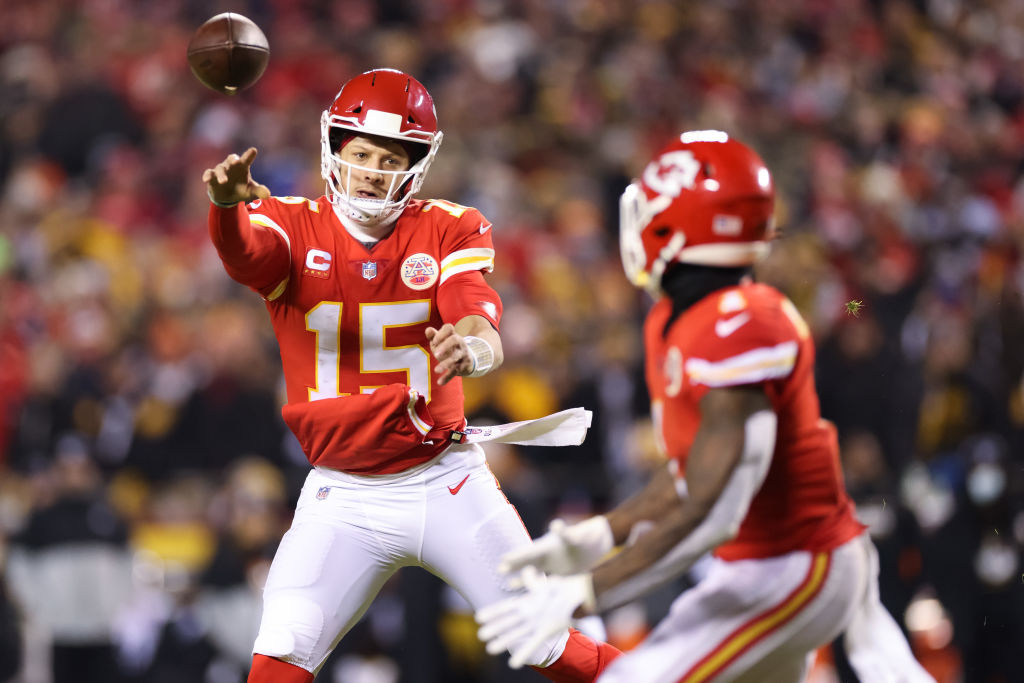 The NFL season starts with 32 hopeful franchises aiming to hoist the Lombardi Trophy at the end of the Super Bowl with confetti raining down. As of today, there are now just eight teams whose hopes of a win in Super Bowl 56 are still alive.

The Super Wild Card Round didn’t exactly live up to expectations (disclaimer: I am a Cowboys fan so I’m declaring my bias now). Only two of the six games ended with a one score difference with both the 49ers and Bengals holding off their opponent late to win the game. The Bills, Buccaneers, Chiefs and Rams all routed their opponents to advance to the Divisional Round of the playoffs. Many fans prefer Wild Card weekend to cheer for upsets and hopes that their team who squeaked into the playoffs can make a run. For my money, Divisional Round is the most exciting, as the matchups are more even and the pressure to get to the Conference Championship looms large. It is also the first time we get to see the number one seeds in action.

Genius Sports Report takes a data-led approach to the Divisional Round games.

The Bengals opened Wild Card Weekend with a win over the Las Vegas Raiders in Cincinnati. The playoff win was the franchise’s first since 1991, meaning for the first time ever, a Bengals fan could send a text about winning a playoff game! Second-year star quarterback Joe Burrow was sensational in leading his team to victory. Burrow finished the night with two touchdown passes and no interceptions, connecting with WR Ja’marr Chase nine times for 116 yards. Chase was one yard behind the week’s receiving leader, but led all receivers with 52.13% of his team’s targeted air yards according to Next Gen Stats. Meaning, when Burrow was looking to throw, he was looking for Chase— and the connection worked.

The Tennessee Titans earned the number one seed in the AFC and earned a first round bye. They were able to sit back and watch the games unfold. Once the Chiefs handled the Steelers, this matchup was set. The Titans won the AFC South by winning their final three games and remained the top contender in the conference despite losing All-Pro running back Derrick Henry to an injury early in the year. The Titans are built on running the football and a stout defense, ranking 6th in rushing yards per game and 6th in points allowed. Titans fans will welcome the extra rest and opportunity to get Derrick Henry back from injury for this matchup. If Henry can get going, he is one of the most explosive running backs in the league and opens up the play-action pass for QB Ryan Tannehill.

The Titans had an early playoff exit last year against the Baltimore Ravens, where Henry was held to 40 rushing yards on 18 attempts (2.2 yards per carry). The Bengals will need to replicate that defense in order to rattle Tennessee, but their performance against the Raiders run shouldn’t calm any fans. Raiders running back Josh Jacobs led all running backs last week with 6.4 yards per carry and 27 rushing yards over expected according to Next Gen Stats. The Bengals will need to stiffen up on defense or find their season end on Saturday. Once Tennessee establishes the run and keeps Henry going, there are few teams that can stop them.

Two staple franchises in the NFC are the San Francisco 49ers and Green Bay Packers. The two teams have met eight times in the playoffs, each winning four times. Their last matchup was in the NFC Championship game in 2019 with the 49ers winning and facing the Kansas City Chiefs in the Super Bowl. The Green Bay Packers are the NFC’s number one seed and are led by this year’s All-Pro quarterback (and likely MVP) Aaron Rodgers. The Packers finished the year 13-4 and will host throughout the NFC playoffs, a fact Packers fans will enjoy, as their team finished 8-0 at home this season.

The 49ers needed to win their final game of the regular season to make it to the playoffs and backed up their case for being in the tournament by beating the Dallas Cowboys in Dallas over Wild Card Weekend. Head Coach Kyle Shanahan and his 49ers are no strangers to the postseason and have been poised for success for several years. Many argue that injuries have kept the 49ers from being perennial contenders and when healthy, San Francisco can compete with anyone. This Saturday may be no different.

Rodgers leads the Packers to the number one seed orchestrating the 10th best offense in yards per game and points per game. Their challenge will be scoring points against San Francisco’s 3rd ranked defense in yards allowed, though Rodgers is not without weapons and creative schemes from Head Coach Matt LaFleur. The difference in this game may come down to turnovers (as most playoff matches do). The 49ers have a -4 turnover differential while Green Bay is second in the league with +13. Green Bay’s young defensive backs have been the difference makers this season. If they play well and force 49ers quarterback Jimmy Garroppolo into difficult situations, he is prone to turnovers, including one in the Wild Card game that led to a Dallas touchdown.

The Buccaneers didn’t need much to dispatch the Philadelphia Eagles in the first round of the playoffs last week. Tampa Bay jumped out to an early 17-0 lead before half-time and ran the score to 31-0 before allowing a score. The final score of 31-15 makes the game seem closer than it really was. Brady wasn’t asked to do much late in the game and finished with two passing touchdowns and 271 yards passing. He showed no signs of slowing down this late in the year and finished with the weeks second highest completion percentage  (78.4), and was 4.1 points over expected tracked by Next Gen Stats. Despite the dominating win, the Buccaneers left the game with more injuries on offense. Right Tackle Tristan Wirfs, one of the best young tackles in the game, left with a lower leg injury. His status is uncertain for the Divisional Round matchup and his replacement will have his hands full against a tough Rams defense.

The Los Angeles Rams wrapped up the Wild Card Weekend with a dominating performance over Divisional rival Arizona on Monday. The Rams beat the Cardinals 34-11 and forced two interceptions from Cardinals quarterback Kyler Murray. Murray was under duress all game and through the shortest interception returned for a touchdown in playoff history when he wildly threw a pass out of his own end zone right into the hands of Rams defender David Long Jr. Long caught the ball at Arizona’s three yard line and walked in untouched.

Rams quarterback Matthew Stafford efficiently led his offense, passing for two touchdowns and rushing for another. Stafford earned his first ever playoff win while completing the second highest average air yards per pass last week, 8.4 according to Next Gen Stats. The Rams have established themselves as a legitimate passing threat with Stafford, NFL’s leading wide receiver Cooper Kupp and former All-Star and OROY Odell Beckham Jr (who has six TDs in nine games with the Rams). The Buccaneers will need to be creative to slow down LA’s passing attack, as Tampa Bay finished the regular season allowing the 4th most passing yards per game. Expect a fun, high scoring game this Sunday.

Last year’s AFC Championship teams face each other in the second AFC Divisional Round match up. Kansas City bested the Bills last year to earn a trip to the Super Bowl and Buffalo is looking for revenge. Bills’ WR Stefon Diggs famously stood on the edge of the field after the game and watched the Chiefs celebrate their AFC Championship, taking note of the feeling and vowing to return to face them. The Chiefs and Bills both looked dominate in their first round match ups, led by their superstar quarterbacks.

The Buffalo Bills became the first team in NFL playoff history to record a perfect offensive game. Through all their drives they never punted, kicked a field goal or had a turnover. Besides drives where they kneeled to end the half and game, each of their offensive possessions ended in a touchdown. Bills quarterback Josh Allen was sensational, throwing for five touchdowns and zero interceptions against a top five New England defense. The Bills stifled the Patriots offense, causing two interceptions and sacking rookie quarterback Mac Jones three times. Josh Allen finished the game with a 157.6 passer rating and his completion percentage was 17.2 points over expected according to Next Gen Stats. Allen was supported by a more balanced rushing attack led by running back Devin Singletary. Singletary rushed for 81 yards, but 53.33 of his yards were over expected while facing eight or more defenders in the box over 18% of the time, both tracked by Next Gen Stats.

The Kansas City Chiefs spared no expense in dispatching the Pittsburgh Steelers. The Steelers won their way into the playoffs and hoped to give Ben Roethlisberger a happy farewell, but Kansas City had other plans. Patrick Mahomes is peaking at the right time and was in sync with all his receivers. He threw for a Wild Card leading 404 yards and five touchdowns. Mahomes completed a pass that travelled 46.3 air yards, good for the second most last week according the Next Gen Stats (the longest completion last week came from Josh Allen). Mahomes and TE Travis Kelce have been a dynamic connection for years and last week was no different. Kelce was only the third receiver to cross the 100 yard mark last week with five receptions for 108 yards and one touchdown. His 13.2 yards after catch per reception was 5.1 more than expected, the second most of the weekend tracked by Next Gen Stats. This matchup will be strength versus strength as the Bills have the number 1 defense in terms of yards allowed while the Chiefs are the third most proficient offense in total yards. Furthermore, the Bills average 28.4 points per game to Kansas City’s 28.2. This will be a good one!