Who will win the AFC West? 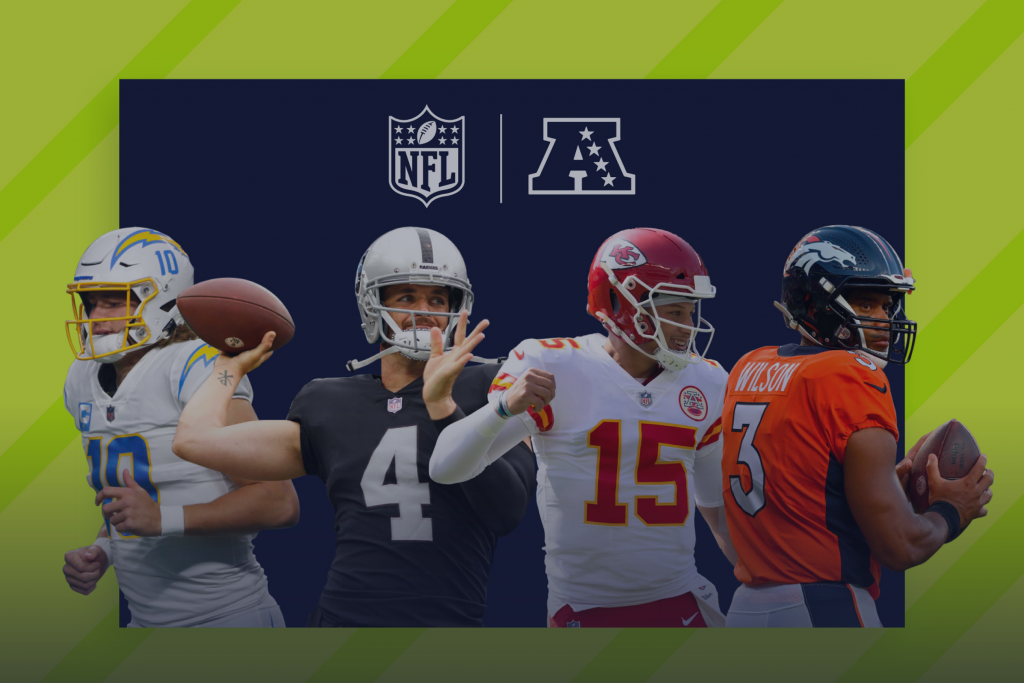 There’s no denying it, the AFC West has emerged as the division to watch this upcoming football season. Although the Chiefs are 6-time defending champs, the other teams in the division have retooled, regrouped, and are looking to knock them off their perch.

We’ve taken a look each team vying to top the most competitive division in football.

Since the departure of Peyton Manning, the Broncos have gone though numerous quarterbacks trying to get back to their wining ways.

Russell Wilson, who the Broncos just signed to a five-year, $245M contract extension, may very well be the answer to their prayers.

New head coach Nathaniel Hackett has been the head of successful offenses in the past and Wilson really gives him a chance to open up the playbook. In what was considered a “down year” for Wilson last year in Seattle, he was still able to throw 25 touchdowns against only 6 interceptions. His ability as a duel-threat QB is well documented.

The WR core of the Broncos will look a bit different, especially with the loss of Tim Patrick, who will be out for the season with an ACL tear. With Wilson on the roster, Jerry Jeudy and Cortland Sutton are in line to become downfield receiving threats, an area the Broncos attempted often last year but struggled with the execution.

Even through their offensive woes, the Broncos defense has been solid, finishing last season 3rd in points against and boasting a top 10 overall defense. If they can get the offense to score more they will be a force for years to come, but it may take a year for Wilson to get acclimated to the new system.

The Chiefs have been the powerhouse of the AFC, having hosted four straight title games and missed out on four straight Super Bowls by overtime losses.

But they have shown cracks in their armor.

The loss of superstar wide receiver Tyreek Hill means Andy Reid will have to figure out a new strategy to remain on top. JuJu Smith-Schuster and Marquez Valdes-Scantling will have big shoes to fill as a downfield threats, meaning Mahomes will need to rely on his All-pro tight end Travis Kelce even more than he has in previous years.

📹: Some of the completions from the #Chiefs Offense during 7-on-7 Drills in Day 2 of Training Camp

The return of running back Clyde Edwards-Helaire should help to open up the field, as long as Mahomes can remain content with taking the short gains provided to him instead of looking to make the play.

Their schedule isn’t going to do them any favors either, as they will have rematches with their most recent playoff foes, Tampa Bay, Cincinnati, and Buffalo. Defense has always been the achilles heel of the Chiefs, but rookie defensive end George Karlaftis is hoping to turn that around and prove he was worthy of the first round pick spent to acquire him.

Key Loss: None to note

Las Vegas finished the 2021 season with a thrilling overtime victory in their final game to make the playoffs, before running eventual AFC champion Cincinnati very close in the Wild Card Round.

With the hiring of new head coach Josh McDaniels and addition of Davante Adams, the Raiders have been the talk of the offseason, with some experts initially picking them as AFC dark horses. The new receiver is an addition to a Raiders passing attack that finished 6th in passing yards the previous year, and Derek Carr is hoping to improve upon a career best year in which he threw for 4,804 yards and 23 touchdowns. Carr has the opportunity to open up the offense and prove that last year was no fluke. With Adams, Darren Waller, and Hunter Renfrow, he will not be short of options to throw to.

Their running game is one area that needs to step it up in order to round out the offense. On defense, Maxx Crosby has a new pal on the defensive line in Chandler Jones to help terrorize opposing quarterbacks and hopefully bring down their average points given up per game, which finished last year ranked 26th in the league at 25.8.

The Raiders will be a fun watch this year.

It was bad enough for the Chargers to lose to the Raiders in overtime to be kept out of the playoffs, but then they had to watch the team they share a stadium with win the Super Bowl on home turf. It’s safe to say last season left a bitter taste in their mouths.

To make sure it doesn’t happen again, Los Angeles set out to fortify their defense to match the explosiveness of their 2nd ranked offense.

The combo of Mack and Joey Bosa on the front line, with Jackson adding to the coverage game, should help the Chargers improve upon their 23rd ranked defense in 2021, even with the loss of White who led the team in tackles.

Quarterback Justin Herbert finished last year with 38 touchdowns to 15 interceptions and will have all his familiar targets to throw to again this year in receivers Keenan Allen, Mike Williams and running back Austin Ekler. A not-so dark horse candidate for the MVP, I expect the young QB to lead this team to a season that reflects the talent in their roster.

Share this:
PrevPreviousPrva Liga: Why you need to check out the Slovenian top flight
NextLiga Profesional: Boca and River Winning Ahead of SuperclásicoNext