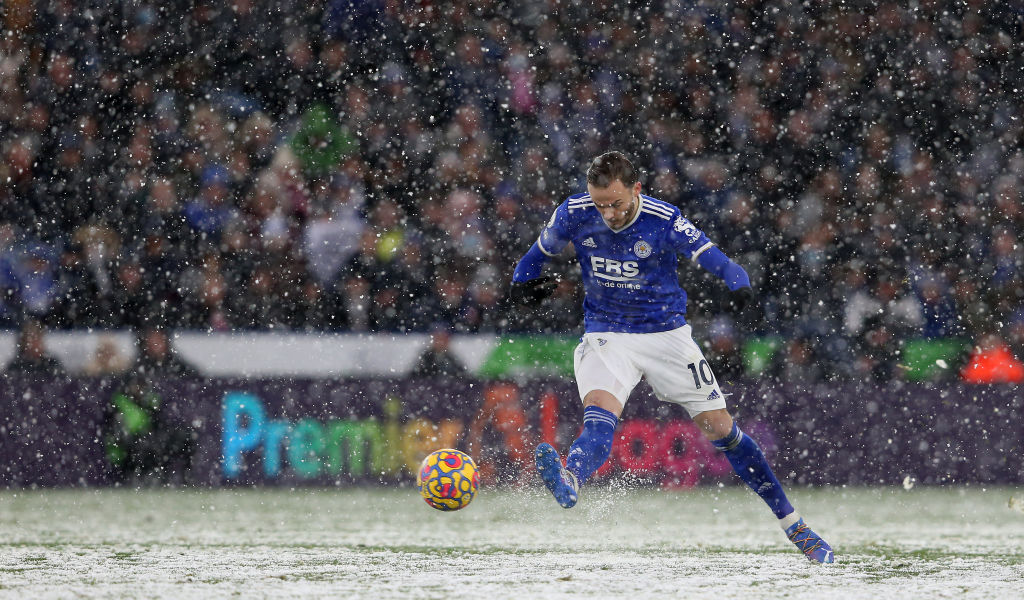 Winter fell on the UK this weekend and games across the country were affected by heavy storms, strong winds and in many cases – snowfall. Our round-up will take you through a stellar weekend of action and measure the success of our pre-game win probabilities, generated by our Genius Predictor.

Liverpool’s goal scoring form continued this weekend with a spectacular 4-0 win over Southampton. The Saints were left helpless against a rampant Liverpool side.

Jurgen Klopp’s men were out of the blocks from the first whistle and opened the scoring within the first minute. A well worked move down the left-hand side between Sadio Mané and Andy Robertson found the Scottish full back with time and space in the box. Robertson delivered a low-driven cross leaving Diogo Jota with a simple tap in to give the home side the early lead.

Liverpool kept on applying the pressure and Jota doubled the lead just past the half hour mark.

Slick passing from Mohamed Salah and Jordan Henderson down the right-hand side this time allowed Salah to slip the ball across the six-yard box and give Jota his second tap in of the game. Jota has now scored seven goals this campaign and has cemented his place in the starting XI.

Five minutes after Jota’s second, Thiago Alcantara got his second goal in a week thanks to a huge deflection.

The Spaniard controlled the ball on the edge of the box, rolled it onto his weaker left foot and fired a shot goal wards. A major deflection sent Alex McCarthy in the opposite direction and sealed the game for Klopp’s men before half time.

Liverpool had more opportunities to add to their lead throughout but were unable to finish good chances. It’s easy to see why the chances of a Liverpool win against a Southampton win were so wide… 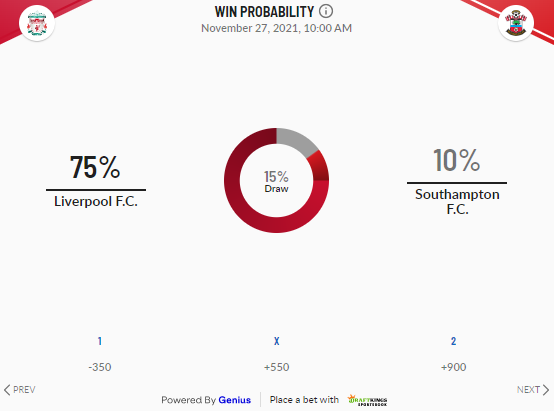 Their home form this season has been extraordinary, and they have now scored two or more goals in their last 16 matches.

Claudio Ranieri’s return to The King Power stadium as Watford manager ended in defeat as his side were unravelled by the Foxes.

James Maddison kicked off the eventful afternoon when William Troost-Ekong left a flighted ball over the top for Ben Foster. The Watford defender was unaware of Maddison’s presence, leaving Leicester’s number 10 with time to pick his spot.

Despite the Foxes fast start, Watford were able to pull themselves level thanks to a well taken penalty from Josh King in the 30th minute.

Watford couldn’t keep up with Leicester’s pace and were down 3-1 as they headed into half time after two fine finishes from Jamie Vardy. A snowy second half slowed the game tremendously and Watford looked to fight their way back into the match. Emmanuel Dennis found the back of the net for the second week in a row after catching Timothy Castagne in possession, and neatly dinking the ball over Kasper Schmeichel.

The visitors couldn’t maintain the pressure however, and an Ademola Lookman tap-in wrapped the game up with with 20 minutes remaining. A merited win, according to our pre-game win probabilities: 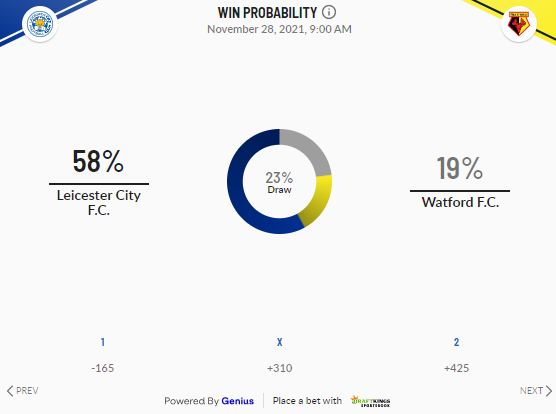 Leicester’s start to this years campaign has been difficult with European fixtures to think about along the way. A fit and firing Jamie Vardy will be the key to unlocking Leicester’s potential this season as they look to climb back into the European spots.

United Escape the Bridge with a Point: Chelsea 1-1 Manchester United

Manchester United’s daunting trip to Stamford Bridge ended in a draw as United’s counter attacking strategy worked to perfection. United fielded a makeshift backline, one of the reasons for the win probabilities below. 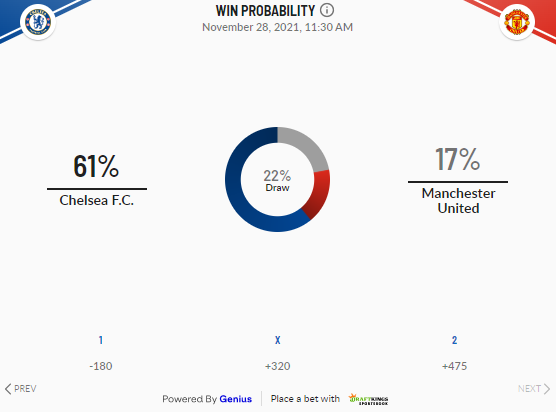 Despite a disappointing first 45, the Red Devils came out in the second half with much more threat and were rewarded for their intense start in the 50th minute. Jorginho failed to control a high ball on the halfway line following a clearance. Jadon Sancho and Marcus Rashford were hunting Jorginho down hoping for a mistake and Sancho’s pressure affected the Chelsea captain’s composure, enabling Sancho to nick the ball from his toes.

United’s man-in-form had plenty of time to size up the opportunity, slipping the ball past Eduoard Mendy.

Chelsea kept on top following the goal and finally got their goal from the penalty spot. Aaron Wan-Bissaka was unaware of his surroundings and kicked through Thiago Silva in an attempt to clear the ball from a corner. Anthony Taylor had no doubts and pointed straight to the spot.

Jorginho stepped up and sent David De Gea in the wrong direction, redeeming his earlier mistake.

Thomas Tuchel will be frustrated with his side’s inability to take clear chances and has allowed Liverpool and Manchester City get within touching distance at the top of the table.

Michael Carrick’s week in charge has been reasonably successful, with Ralf Rangnick being confirmed as the interim manager early on Monday morning.

See how the rest of the Premier League’s teams fared against our pre-match predictions below.

Arsenal’s fine form continued with a 2-0 win over Newcastle. Eddie Howe was on the touch line for the first time since taking charge at Newcastle, but another defeat leaves them bottom of the table. 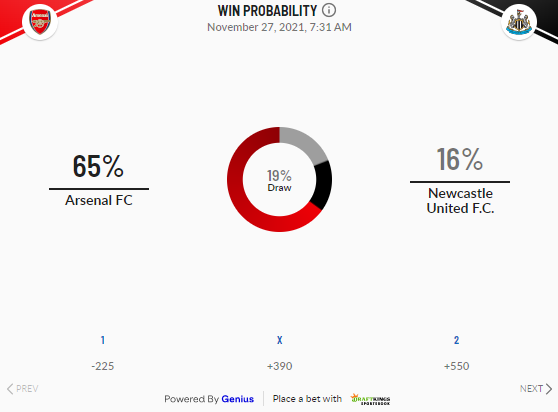 Manchester City came out as 2-1 winners in a clash with West Ham thanks to goals from İlkay Gundogan and Fernandinho. 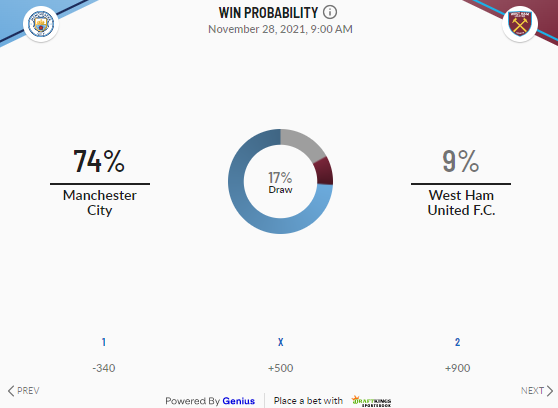 Steven Gerrard’s start to life in the Premier League has been excellent as Aston Villa picked up three points in a 2-1 away win at Crystal Palace. Villa clearly upset the prevailing sentiment of this game and picked up a statistically-unlikely away win. 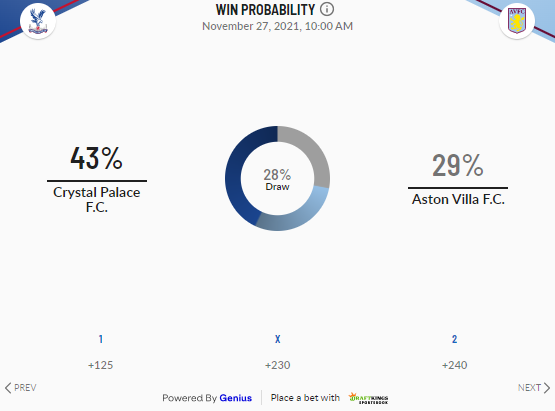 Brentford sealed a 1-0 win over a struggling Everton side thanks to Ivan Toney’s first half penalty. 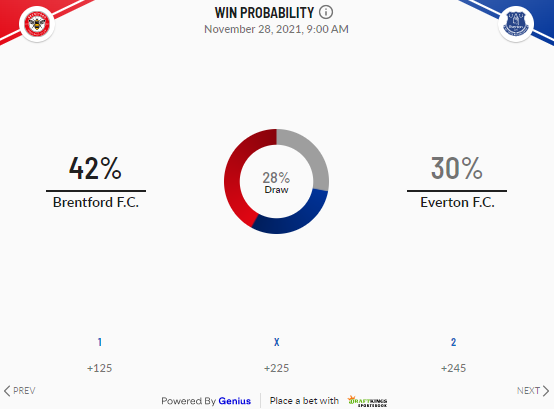 Wolves played out a 0-0 draw with Norwich, whilst Brighton were unable to get the best of Leeds, as the game also ended in a stalemate. 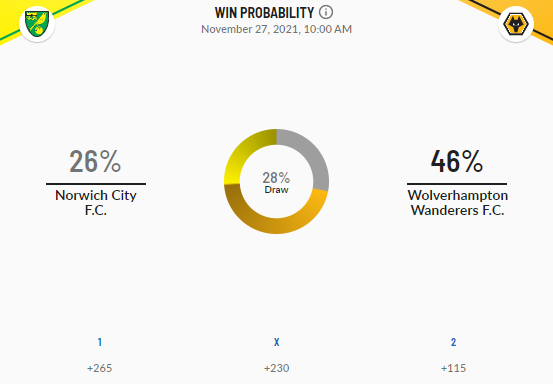 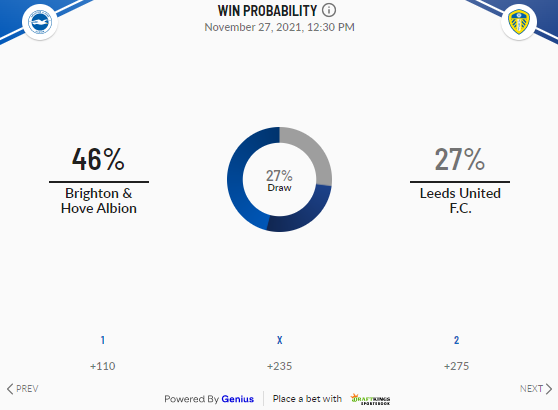 Burnley’s fixture with Tottenham was postponed due to heavy snowfall at Turf Moor.

Player of the Week – Thiago Alcantara

Thiago has struggled to adapt to life in the Premier League since his arrival last summer, but the midfield maestro has looked to be getting into his stride in recent weeks. A sublime performance where he controlled the game with his intelligence and movement, including another goal in front of the home fans, earns him our Player of the Week.