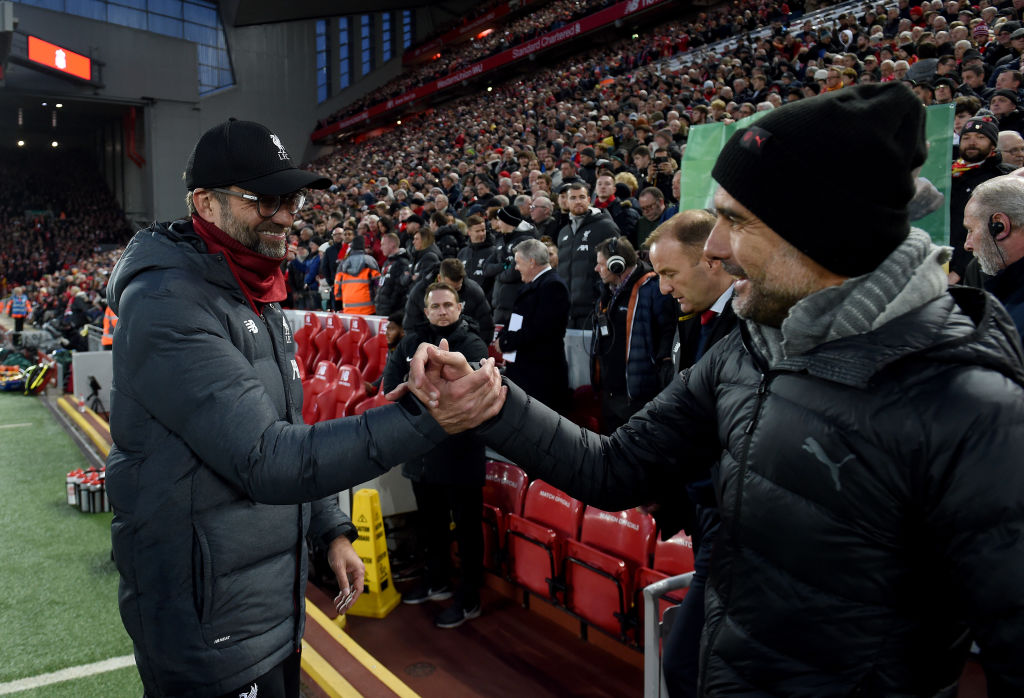 Jurgen Klopp and Pep Guardiola will go head-to-head for the 22nd time on Sunday afternoon as Liverpool welcome champions Manchester City to Anfield.

After many titanic battles over the years, there is little to split the two with nine wins apiece.

Guardiola has a positive record over almost every manager and it is Klopp who has caused him many problems over the years with his high-pressing tactics and quick transitional play.

The 4-3 Liverpool win at Anfield in 2018 will live long in the memory as will the 3-1 win in the Premier League in 2019, that put Liverpool eight points clear at the top of the league and well on their way to finally ending their drought.

The Spaniard gained some revenge last season as City blew a struggling Liverpool away in the second half to win 4-1 and stamp their authority on the title race.

It was the first time the Blues had won at Anfield since 2003.

Time to look at this season. Liverpool are a point clear of City at the top after making an unbeaten start with four wins and two draws from their six games.

The hosts were involved in a wild game of football at Brentford last Saturday, drawing 3-3 in an epic battle.

They are now unbeaten in 16 Premier League games.

Mohamed Salah was once again in the goals, he netted his 100th Premier League goal in just 162 games – the fifth-quickest to reach the landmark in the competition’s history.

A blow for Liverpool is that right-back and key creator Trent Alexander-Arnold will miss the game through injury. It is expected that veteran James Milner will deputise for the academy product.

Guardiola’s men demonstrated their class with a superb performance to win 1-0 at Stamford Bridge last Saturday; a real reminder of their quality after a slow start to the season.

It was a dominant performance from City, denying Chelsea a shot on target and creating enough chances to score a few more goals.

The win was Guardiola’s 221st as Man City manager, making him the most successful manager in the club’s history, in terms of wins.

However, his side were undone by PSG in midweek in the Champions League, falling to a 2-0 defeat after failing to break down Mauricio Pochettino’s side.

The Reds have scored the most goals in the division (15), while City have the best defensive numbers and have conceded just one goal.

After Cristiano Ronaldo’s heroics against Villareal, Manchester United play host to Everton in their fourth game at Old Trafford in 11 days.

They were beaten last week by Aston Villa after a frenetic ending that saw Kortney Hause score with two minutes remaining.

Bruno Fernandes then blazed a penalty over the bar in stoppage time as United were beaten for the third time in four games.

Ole Gunnar Solskjaer has yet to find the right balance in midfield and they were indebted to David de Gea to keeping them in the game against Villareal in midweek.

Everton have made a strong start to the season and are level on points (13) with the hosts.

Rafa Benitez has made the Toffees organised and well-structured off the ball. New signings Demarai Gray and Andros Townsend have made excellent starts to their careers at Goodison Park.

They will again be without three key players at Old Trafford: Dominic Calvert-Lewin, Richarlison and Seamus Coleman.

Everton have won just once in 28 League trips to Old Trafford, last winning in 2013.

Man United have kept just one clean sheet in their last 17 games in all competitions.

Elsewhere, Tottenham Hotspur host Aston Villa on Sunday, looking to bounce back in the league after suffering three consecutive defeats.

Chelsea entertain Southampton at Stamford Bridge with the hope of showing more spark and invention in the final third after having only one shot on target in their last two games.