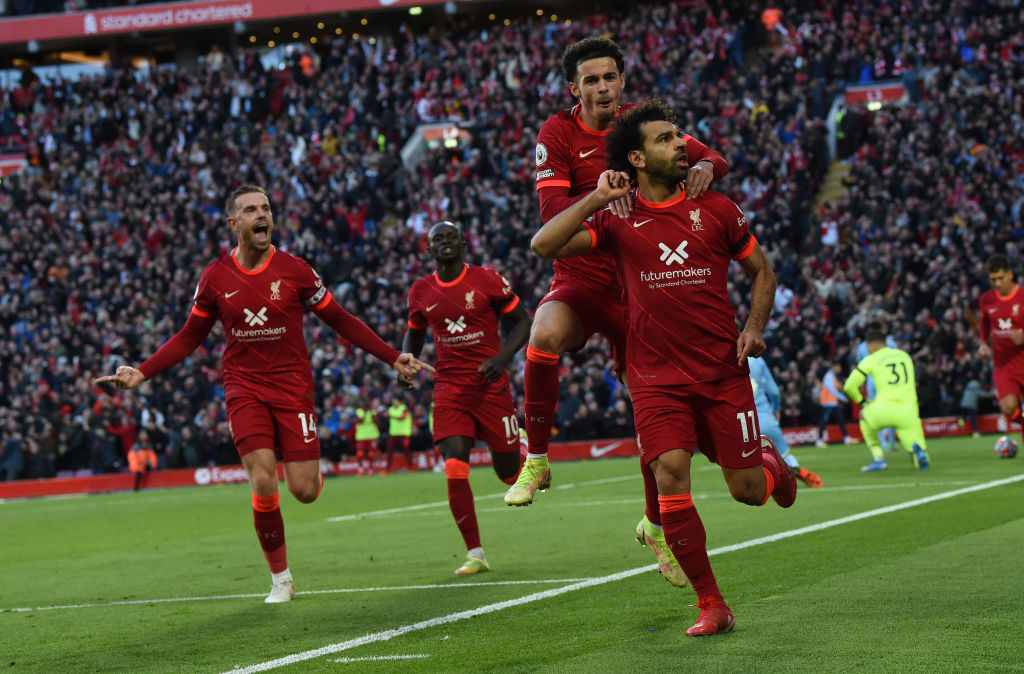 Sunday’s meeting between Liverpool and Manchester City lived up to the hype as an absorbing game ended 2-2 at Anfield.

Manchester City started the game well and dominated possession in the first half.

Liverpool, coming off the back of an impressive win in Porto, looked leggy and struggled to match the intensity of City.

Phil Foden saw plenty of the ball down the left wing as he terrorized James Milner, who was filling in at right back for the injured Trent Alexander-Arnold.

Despite the dominance in the first half, City were unable to breach the Liverpool goal were thankful to be heading into the break level.

It looked to be only a matter of time until City would make the breakthrough, but Jurgen Klopp’s half time talk gave Liverpool a new lease of life and it was the home side that took the lead.

Excellent play down the right-hand side by Mohamed Salah gave the Egyptian enough time and space to pick out Sadio Mané, who had made a run off the back of Rúben Dias.

Mané remained calm and slotted the ball past Ederson to give Liverpool an unexpected lead.

Liverpool looked re-energised in the second half, but Phil Foden was able to bring the visitors level 10 minutes later.

Foden picked the ball up on the left-hand side after a pass by Gabriel Jesus and was able to fire the ball low and across goal, well out of the reach of Alisson, as it nestled in the far corner.

Liverpool refused to back down and it was a piece of individual brilliance from Mohammed Salah that gave Liverpool the lead for the second time in the match.

Salah was able to sit Bernardo Silva down before twisting in and out of Aymeric Laporte, giving himself enough space for the opportunity to smash the ball past Ederson on his weaker right foot.

A sublime goal from one of the world’s most in-form players.

Phil Foden was at the heart of another fine City move, and his attempted cut back found Kevin De Bruyne on the edge of the box.

Both sides had chances to win the match, but a point a piece was probably a fair result.

Salah and Foden stood out and were awarded with a joint ‘man of the match’ award.

Chelsea left it late to beat ten-man Southampton, scoring twice in the final seven minutes to edge past Southampton 3-1 after James Ward-Prowse was dismissed.

Chelsea started brightly and were able to take the lead in the ninth minute thanks to a header from Trevoh Chalobah.

A whipped in corner was flicked on at the front post by a rejuvenated Ruben Loftus-Cheek, and it was fellow academy graduate Trevoh Chalobah that was quickest to react at the back post – taking his tally up to two for the season.

Chelsea continued to dominate for the first half and created a number of chances to double their lead.

Timo Werner looked to have slotted a fine header home, but it was eventually ruled out by VAR for a foul in the build-up.

Southampton came out in the second half and looked to put pressure on the home side.

The Saints were rewarded for their efforts after ex Chelsea youngster, Tino Livramento, beat Ben Chilwell in the box and was illegally taken down by the Chelsea full back.

James Ward-Prowse stood up for his side as he often does, and comfortably slotted the ball away, sending Edouard Mendy in the wrong direction.

Southampton looked confident in stealing a win away at Stamford Bridge, until James Ward-Prowse was sent off for what was deemed to be a dangerous tackle on Jorginho.

Chelsea were living dangerously in possession in their own third before Ward-Prowse slid in looking to create a chance for his side.

His late challenge was punished by VAR and Southampton’s skipper was given his marching orders.

The game opened up and gave Chelsea the opportunity to take advantage of the extra space and create a bundle of chances.

Forgotten man Ross Barkley came off the bench and made an instant impact as his lofted through ball was latched onto by César Azpilicueta.

The Spaniard then crossed for Timo Werner, who put Chelsea back in front with six minutes remaining.

Ben Chilwell sealed the game in the 89th minute when his powerful volley crossed the line, despite Alex McCarthy’s best efforts to keep it out.

Thomas Tuchel’s side secured all three points after a disappointing week; they lead the table going into the international break.

Leicester’s difficult start to the season continued as they were held to a 2-2 draw at Selhurst Park.

Crystal Palace dominated the first half of the game with long spells of possession and several chances to take the lead, however, Leicester were able to break the deadlock thanks to a defensive error from Joachim Andersen.

Andersen was caught in possession by Kelechi Iheanacho and the Nigerian never looked like missing as he slotted the ball past Vicente Guaita.

Iheanacho finally got off the mark this season in what was his first Premier League start since May.

Once again, Palace were caught lacking at the back and an excellent through ball by Harvey Barnes found Jamie Vardy.

Vardy set his sights for the far corner before rolling the ball in at the near post, scoring his sixth goal of the campaign and giving Leicester a 2-0 lead heading in at half time.

The Foxes were kept pinned back by Crystal Palace, as Patrick Viera’s men looked to capitalise on their consistent pressure and take something out of the game.

Second half substitute, Michael Olise, was on target to score his first goal for Palace since his summer move from Reading and reduced the deficit to just one goal.

Palace dominated the second half and were finally able to draw level when Jeffrey Schlupp’s header beat Kasper Schmeichel in the 72nd minute.

Crystal Palace will rue individual errors that cost them the win, but another impressive performance from the Eagles was enough to get a well-earned point against Brendan Rodgers’ Leicester.

The Foxes have looked suspect defensively this season, missing the likes of Wesley Fofana and Jonny Evans.

The partnership of Caglar Soyuncu and Jannik Vestergaard has not worked at all as they have now conceded 12 goals this season in the Premier League.

Wolves took all three points at home to Newcastle with a 2-1 win.

A brace from Hwang Hee-chan secured the victory as he looks to set up a deadly strike partnership with Raúl Jiménez.

Brentford’s form continued at the weekend with a last gasp winner against West Ham, securing a 2-1 victory.

Yoane Wissa was on hand to secure all three points following his heroics against Liverpool last week.

Tottenham followed up their victory in the Europa Conference League with much-needed 2-1 victory over Aston Villa to take some pressure off manager Nuno Espirito Santo.

Manchester United were left frustrated at home again. Cristiano Ronaldo was left on the bench and a lacklustre performance allowed Everton to get a 1-1 draw.

The pressure continues to mount on manager Ole Gunnar Solskjaer as his side face many of the top sides after the international break.

Leeds United got their first win of the season with a 1-0 victory over Watford.

Brighton were unable to beat Arsenal despite an impressive performance with the game ending 0-0, as Norwich picked up their first point of the season with a 0-0 against Burnley.

Player of the Week – Mohamed Salah

Salah’s individual brilliance earned Liverpool a hard-earned point in what could be a decisive match in the race for the title.

Despite Manchester City dominating the first half, Salah’s pace and intelligence brought his side into the game and a sublime goal and an impressive assist earned his side a point against the defending champions.