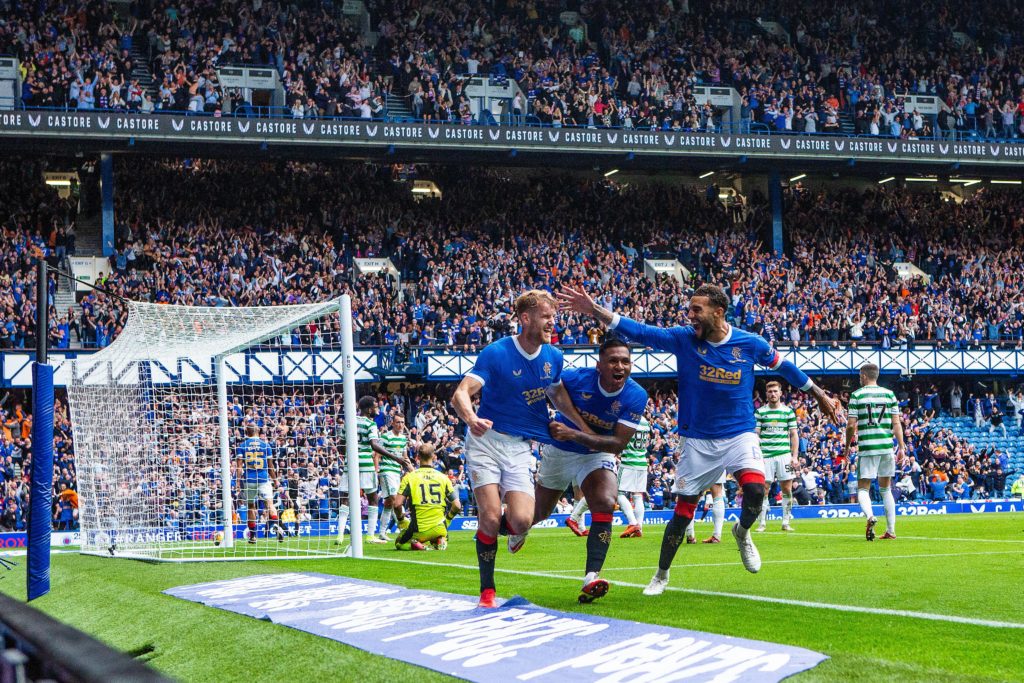 🔥 Erling Haaland has outscored his xG by almost 100% so far this season:

After 8 games, his xG is higher than Romelu Lukaku had throughout the entire 2021/22 season.

🌪️ These 10 running backs have picked up the most rushing yards over expected in the #NFL so far, according to @NextGenStats.

#LUFC have been one of the most intense teams in the @premierleague so far this season. But they’re also technically strong.

Players with successful most passes between the lines:

The #NFL has come to the UK! 🇬🇧

🔥 The first of three London games sees the most aggressive QB in the league – @Saints’ Jameis Winston – take on the @Vikings.

⚡️ Will Cousins, Jefferson, Cook & co. have too much for the Saints defense?

A depleted Rangers secured victory over Celtic in the clubs’ first meeting of the season. Defender Filip Helander’s second-half header proved decisive in a game of few clear-cut chances for either side.

Both sides went into Sunday’s match with matching records in the league and Europe; both eliminated from the Champions League qualifying stages, both with two wins and a defeat from their opening three league games and both had progressed this midweek through Europa League qualifying ties to reach the competition’s group stage.

Despite the similar progress, Ange Postecoglu’s Celtic were viewed by many as favourites to claim victory at Ibrox.

As a result, Robby McCrorie made his first league appearance in goal and centre-back Leon Balogun stepped in at right-back.

To compound the worries on the pitch, Steven Gerrard was also required to isolate leaving Rangers’ assistant manager, Gary McAllister, to instruct from the dugout.

Rangers threatened early with Alfredo Morelos turning a Borna Barisic cross over the bar within two minutes of the start.

Celtic recovered from the early scare to control possession in the game and created their first chance after 20 minutes.

Anthony Ralston’s cross was not cleared but Kyogo Furuhashi’s curling effort went over the bar.

Kyogo again was involved as his cut-back found the Frenchman six-yards out in front of goal but Edouard knocked the shot wide of McCrorie’s post.

Ryan Kent went close in the 32nd minute when his right-footed shot hit the outside of Joe Hart’s post.

Just past the hour mark, Rangers were finally able to break the deadlock.

A wonderfully delivered corner by Borna Barisic was met at the far post by Rangers centre back, Filip Helander. Helander rose highest amongst a crowd of players and headed it back across goal, just out of reach for Joe Hart.

The remainder of the 90 saw Celtic pushing for an equaliser. Kyogo Furuhashi had the best of the chances for the Hoops with five minutes remaining.

Kyogo found himself put through on goal with Ryan Christie arriving at the back post. Despite the tight angle, Kyogo opted to fire across goal, but stand-in keeper Robbie McCrorie was able to save with his feet.

A minute later, Kyogo was put through on goal again but this time decided to try and find a teammate. Rangers’ robust defence managed to follow the runners and were able to clear the ball as they saw the game out.

Ange Postecoglou will be disappointed with his first Old Firm derby as his team were unable to replicate their league form shown in recent weeks.

Rangers will be delighted with taking all three points with the difficult week they have endured.

This was not the result that Celtic were seeking, however, an improved performance from last season’s derbies will inject fans with positivity as they look to steal the crown from their rivals.

Hearts struck at the end of each half to continue their fine form to the league campaign.

Hearts travelled to Tannadice to face Dundee United for the first league meeting between the clubs since February 2016.

The visitors had the better of the first half as John Souttar and Peter Haring missed opportunities to go in front.

The opening goal came in first-half stoppage time when Hearts were awarded a penalty for a foul on Gary Mackay-Steven for the second week in a row.

United goalkeeper, Trevor Carson, dived to his right to superbly save the Liam Boyce’s spot-kick but the ball fell straight to the Hearts striker to knock home the rebound.

Dundee United were much improved in the second half testing Scotland international, Craig Gordon, in the Hearts’ goal. Charlie Mulgrew’s free-kick from just outside the box producing an excellent stop from Gordon.

It was Hearts who were to get the next goal in the 91st minute as Armand Gnanduillet made it 2-0 from 16 yards.

Two second-half goals saw Hibs continue their unbeaten start and maintain their place at the top of the league.

Livingston’s pointless start to the season continued at Easter Road on Saturday.

The away side were forced into three changes during the game as the squad struggled with illness and injury, Livingston striker, Bruce Anderson, spending the night in hospital after suffering a seizure on the pitch.

Hibs scored in the 51st minute, striker Kevin Nisbet turning his marker in the box to place a low shot in the bottom far corner.

Martin Boyle made sure of the victory with a minute of normal time remaining, running onto a perfectly timed Scott Allan back-heel in the penalty area to finish an excellent chip over Max Stryjek.

Tony Watt’s clever backwards header was enough to give Motherwell the points at home to Dundee. Watt’s 34th minute goal came after Dundee’s Paul McGowan had hit the bar with a powerful 25 yard shot.

Full-back Jake Carroll received a straight red card eleven minutes from the end to send Motherwell down to ten men, but the ‘Well held on for the victory after Dundee’s Jason Cummings missed a last-gasp chance.

Regan Charles-Cooke’s 33rd minute goal looked to have given Ross County the win at Aberdeen, but a late Christian Ramirez equaliser shared the points.

Aberdeen missed the chance to score first as Austin Samuel’s header was straight at Ross Laidlaw in the County goal. Ross Callachan went close before Charles-Cooke’s finish from 12 yards put the visitors 1-0 ahead.

The home side put pressure on the County defence, the best chance falling to Scott Brown but they could have been further behind had Ross Callachan not had his angled shot cleared off the line.

The leveller came late on, Dons’ Jonny Hayes’ shot was initially saved by Ross Laidlaw but it slipped from his grasp to be finished by Christian Ramirez a yard from goal.

St Mirren and St Johnstone continue their search for their first league win after a goalless draw. St Mirren felt aggrieved to have a Connor McCarthy header disallowed for offside.

St Johnstone nearly stole the points at the end through Glenn Middleton but his free-kick came back off the post. St Mirren midfielder Ethan Erhahon received a red card for a second bookable offence in the 92nd minute.

Hibernian top the league, two goals better off than Hearts in second. The sides meet in the next round of fixtures. Rangers are up to third, Aberdeen drop to fourth but maintain their unbeaten start. 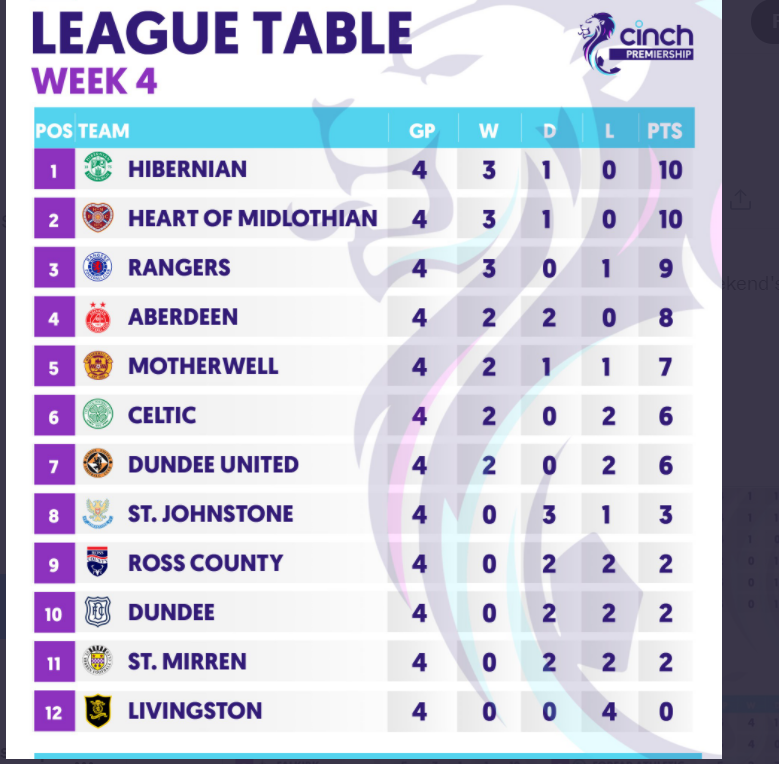 Celtic’s defeat leaves them in sixth place behind Motherwell. Dundee United are seventh above St Johnstone, Ross County and Dundee, who all remain winless. Livingston are bottom of the league and yet to register a point.

Share this:
PrevPreviousLeague Two round up: Forest Green beaten; Oldham off the bottom with stunning turnaround
NextEredivisie round up: PSV and Ajax score five; Feyenoord beaten in UtrechtNext

🔥 Erling Haaland has outscored his xG by almost 100% so far this season:

After 8 games, his xG is higher than Romelu Lukaku had throughout the entire 2021/22 season.

🌪️ These 10 running backs have picked up the most rushing yards over expected in the #NFL so far, according to @NextGenStats.

#LUFC have been one of the most intense teams in the @premierleague so far this season. But they’re also technically strong.

Players with successful most passes between the lines:

The #NFL has come to the UK! 🇬🇧

🔥 The first of three London games sees the most aggressive QB in the league – @Saints’ Jameis Winston – take on the @Vikings.

⚡️ Will Cousins, Jefferson, Cook & co. have too much for the Saints defense?