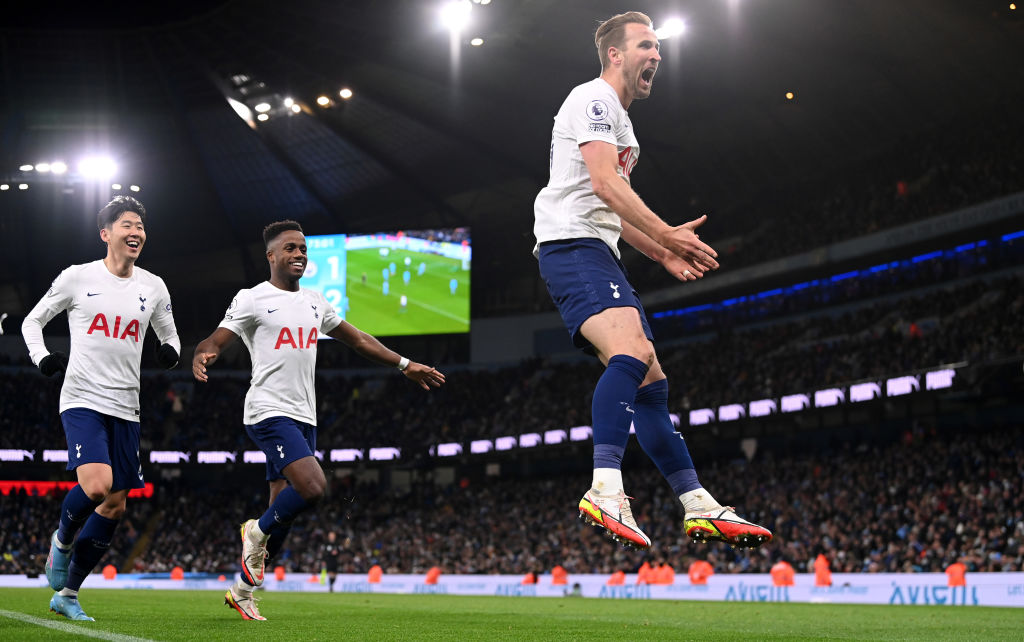 Harry Kane’s last-gasp winner was enough to steal all three points for Tottenham, a game which the Genius Sports Predictor gave Spurs just a 9% chance of winning. A rare loss at home for City has now closed the gap between them and Liverpool to just six points.

What looked to be a daunting trip up to the Etihad started perfectly as Tottenham came firing out of the blocks and were rewarded for the fast start within five minutes. A sweeping move allowed Harry Kane to send Heung Min Son through on goal with time to assess his options. Son took his time and sent Ederson to the ground, before rolling it across to new signing Dejan Kulesevski. The Swedish international kept composed and rolled the ball into the empty net.

Going behind did not alter Pep’s plan and City were at their brilliant best, dictating the play and barely giving Spurs a sniff at the ball. They were finally rewarded for their efforts just past the half hour mark when Ilkay Gundogan fired home from close range following Hugo Lloris’s spill.

The home side had the lion’s share of possession for the majority of the game but were unable to take advantage of their dominance.

Harry Kane was at his brilliant best throughout and was on hand to restore Tottenham’s lead on the hour mark. A beautifully weighted cross from Son was met by Kane, who guided into the top corner to put Spurs 2-1 up.

Spurs looked to hang on for the remainder of the match and were doing a remarkable job, until Bernardo Silva’s low driven cross was met by Christian Romero’s arm, and a VAR check gave Man City a lifeline from the penalty spot.

Riyad Mahrez stepped up and fired the ball into the top right corner, giving Lloris no chance.

After City looked to have salvage a vital point at the top of the table, Spurs were adamant on taking all three points, and pushed for the winner with seconds remaining.

Kulesevski found himself down the right-hand side and whipped in a teasing cross which was attacked by Harry Kane. Kane rose the highest and managed to direct his header past Ederson and ensured his side were heading back to London with three important points as they hunt down the top four.

Spurs’ resilience and unity throughout the 90 minutes gave them the well-deserved win and keeps them in the race for 4th place.

On the other hand, the loss for Manchester City opens the door for Liverpool to close the gap to just three points – if they win their game in hand against Leeds during the week.

An electric atmosphere at Elland Road had Leeds ready from the jump, and it took some time for Manchester United to settle into the game and get a hold of the ball.

The Red Devils broke the deadlock just past the 30-minute mark when Harry Maguire met Luke Shaw’s in-swinging corner. United’s skipper headed home with no problems and scored United’s first goal from a corner all season.

Manchester United doubled their lead on the cusp of halftime when Victor Lindelof’s marauding run from centre back opened up space for Jadon Sancho to loft a ball towards Bruno Fernandes, who headed the ball low and past Illan Meslier.

Leeds came out in the second half a completely different side and made the most of a frenetic two minutes: Rodrigo’s attempted cross managed to get the better of David De Gea in the 54th minute and cut the deficit to just one; and 30 seconds later, Leeds were level after Daniel James driven cross flashed across the face of goal, but second half substitute Raphinha slid in at the back post to pull his side level.

Elland Road was lifted, and they pushed on with real belief of a winner, but Ralf Rangnick’s substitutions proved to be decisive: Fred bagged his 3rd goal of the season before Elanga sealed the game with a fine finish in the final few minutes.

An important victory for Man United keeps them within touching distance of the top 4, but more dropped points for Leeds pulls them into a relegation fight.

Norwich gave title-chasing Liverpool a mighty scare at home for about an hour. After holding them to 0-0 in the first half, the visitors took the lead early in the second half and looked to cause a shock result. But introduction of Thiago as a substitute was crucial for the reds, who restored calm and score two goals in quick succession, before January signing Luis Diaz scored his first goal for Liverpool in front of the Kop end.

Burnley picked up some much-needed points with their 3-0 win away at Brighton. Wout Weghorst opened up his account in the Premier League and will hope to help Burnley survive.

Arsenal secured a 2-1 victory at home to Brentford thanks to Saka and Emile Smith Rowe.

Southampton’s fine form continued with a 2-0 win against a struggling Everton side.

Aston Villa’s poor run of form continued with a 1-0 loss to Watford.

Wolves’ push for Champions League looks possible with another 3 points picked up against Leicester.

Chelsea picked up a 1-0 win away at Crystal Palace as West Ham were unable to get the better of Newcastle in their 1-1 draw.

Player of the Week – Harry Kane

Harry Kane’s outstanding performance helped Tottenham to a famous win away at the champions. Excellent hold up play and intelligence helped his side throughout and two vital goals ensured the three points.

Share this:
PrevPreviousEFL weekend round-up: All the shock results and managerial departures from across the EFL
NextBundesliga round-up, Matchday 23: Goals galore as Bayern, Dortmund & Leipzig get big victoriesNext