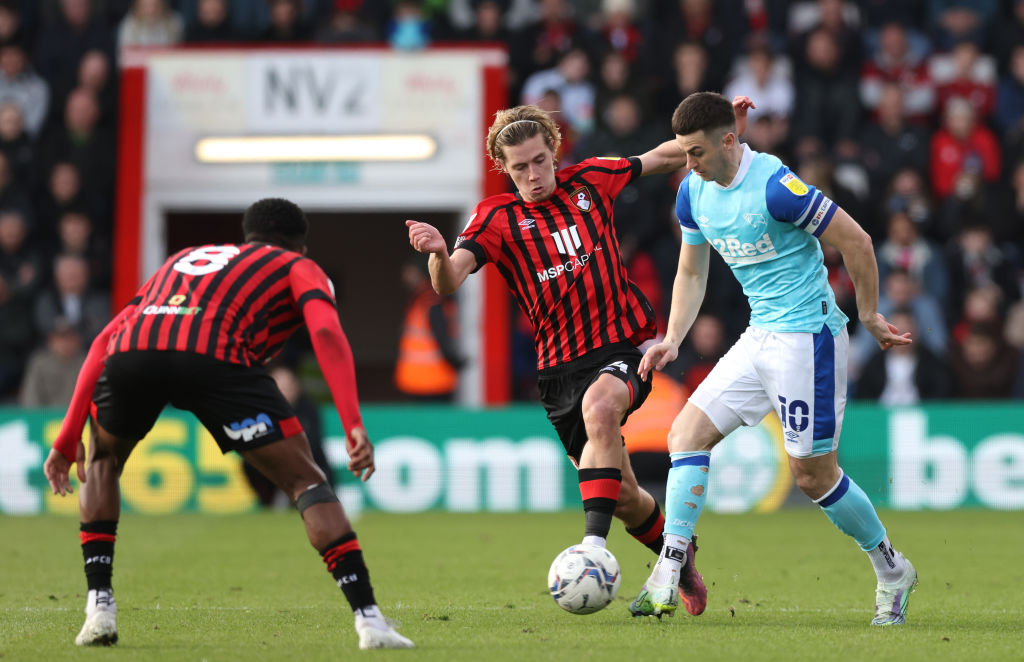 Fulham and Huddersfield both drop points as Bournemouth eye automatics

The Terriers appeared to be set to make it five wins on the spin in the league until a Karlan Grant penalty and a late Andy Carroll header put a spanner in the works.

It could be considered two points dropped for Town who, despite the Baggies late comeback, kept hold of a 17-game unbeaten run in the league.

Saturday afternoon started with struggling Barnsley at home to top of the table Fulham at Oakwell. This seemed to be an away banker -it was not. Barnsley had bright spells throughout this clash and took the lead through Carlton Morris’ penalty. They led from that point until four minutes from time. Harry Wilson’s late long-range equaliser spared the Cottagers blushes and extended their lead to 15 points for a few hours at least.

The pressure was on Bournemouth to get a positive result against struggling Derby at the Vitality Stadium. Dominic Solanke, with his 22nd goal of the season, and Jamal Lowe’s late goal secured a 2-0 success meaning Scott Parker’s side overtook Huddersfield and with-it 2nd place in the table. The Cherries have only lost one of their last seven games as they look to take advantage of their games in hand on Carlos Corberan’s side.

Peterborough stay rooted at the foot of the Championship table despite stealing a late draw against Stoke City. Jonson Clarke-Harris’ late penalty meant they escaped with a draw from a game they twice came from behind in. Their inferior goal difference (-45, having conceded 72 this season) effectively means the Posh are seven points from safety with 10 games left.

Nottingham Forest continued their impressive form against struggling Reading. They are two points away from the top six after going seven games unbeaten and confidently cast aside the Royals 4-0 thanks to a brace from Keinan Davis, Ryan Yates and substitute Sam Surridge.

Millwall and Middlesborough are also making things interesting in the play-off hunt. They met at the Den although they couldn’t be separated, and the game finished goalless. Both sit one and three points off the top six respectively. 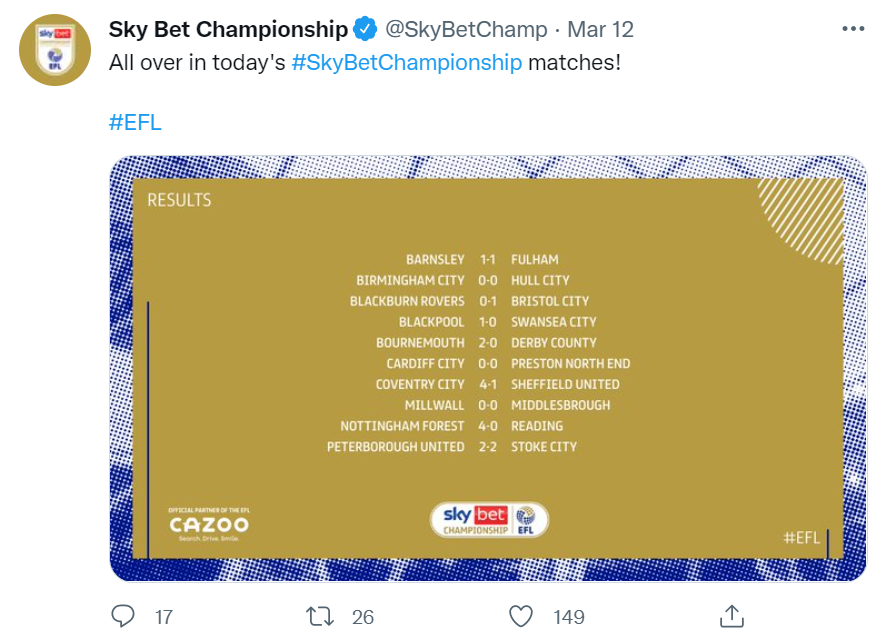 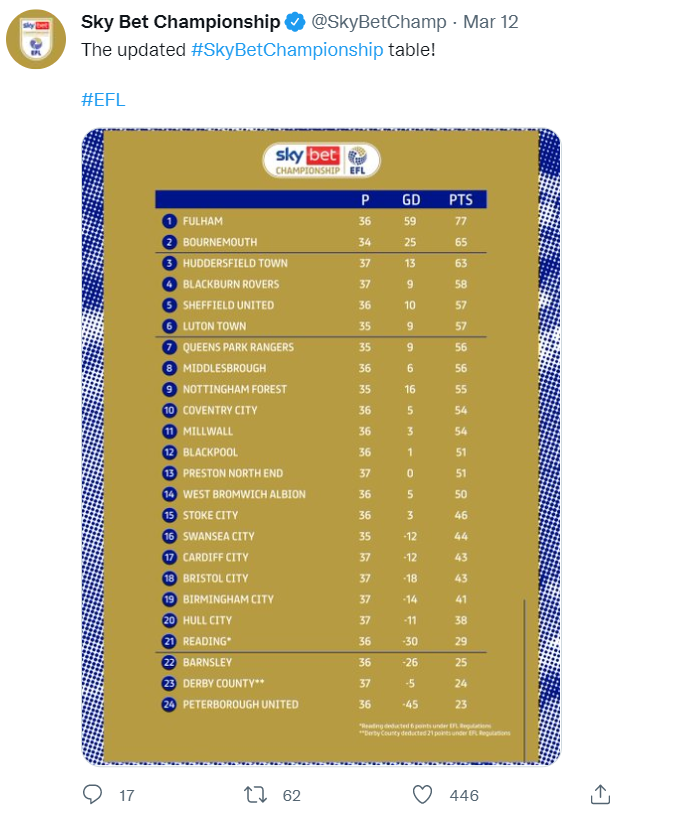 There is only one place to start in League One and that is at Stadium MK as second met third when Wigan travelled to MK Dons. The home side were unbeaten in ten games, and the Latics had lost just once in seven league games. Only top of the table Rotherham and the Dons had a better away record coming into this.

They couldn’t be separated as the game finished 1-1, with Harry Darling grabbing a late equaliser for the Dons.

Rotherham have now gone without a win in three league games, their longest run of the season, as they laboured to a 0-0 draw with play-off hopefuls Wycombe Wanderers. That result has them four points clear of Wigan.

A team on the march and hopeful of a play-off spot is Sheffield Wednesday. They secured a huge 6-0 success against Cambridge United at Hillsborough. Only Sunderland boast a better home record with their one defeat at home coming from top of the table Rotherham. 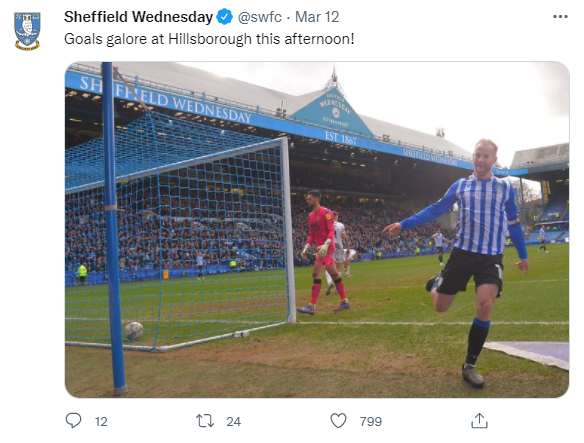 AFC Wimbledon are in free-fall. They cling onto 20th place in League One currently due to superior goal difference over Gillingham. They have gone 18 games without three points after their most recent 2-0 defeat at home to Lincoln. The Imps went down to 10 men mid-way through the second half with the score at 1-0 but despite this they added a second through Teddy Bishop’s late goal.

Gillingham edged closer to safety after they beat fellow strugglers Doncaster 1-0, with loanee Charlie Kelman scoring in the first minute of that game. This victory puts them level on points with 19th placed Fleetwood and 20th placed AFC Wimbledon after two straight away wins. 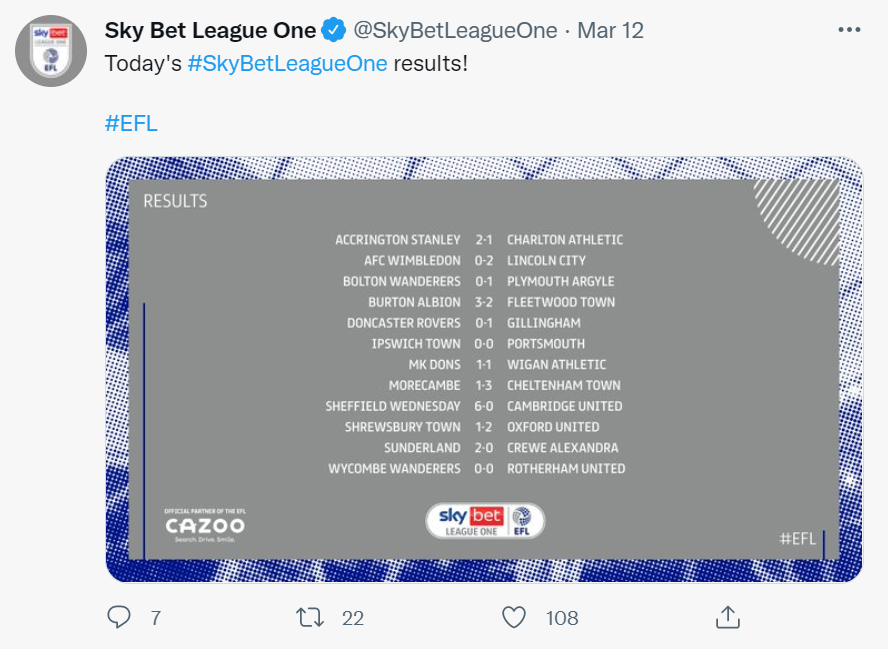 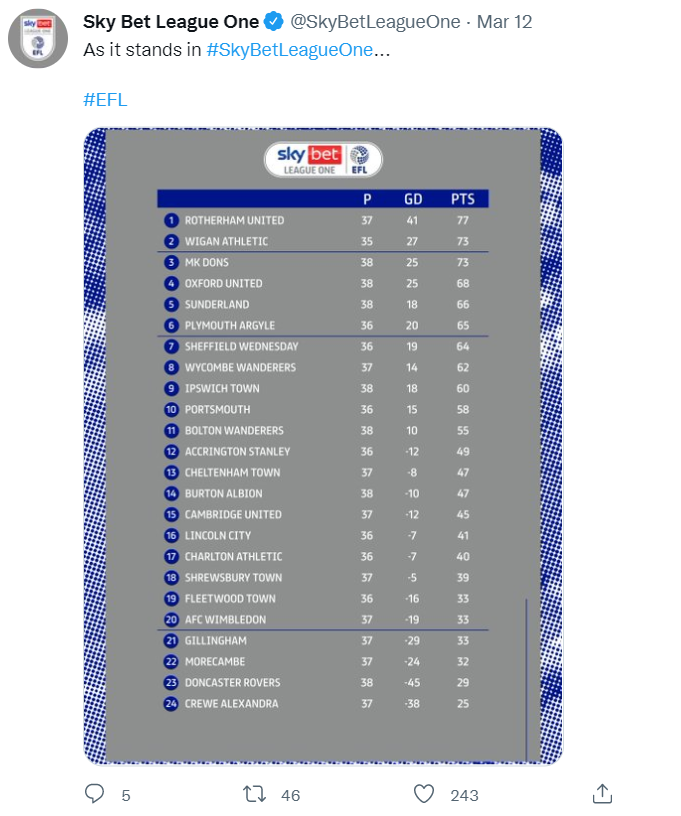 Too many Cook(e)s didn’t spoil the broth for Mark Hughes as he collected his first victory as Bradford boss thanks to Callum Cooke and Andy Cook’s goals against Forest Green Rovers. The league’s pace setters have now not won in six games as their push for the League Two championship appears to be stalling.

Hot on Rovers tails are the likes of Newport County, who went to struggling Stevenage and won 2-0 thanks to Rob Street and Ryan Haynes goals which meant they jumped to third at Tranmere’s expense, despite their 3-2 success over in-form Mansfield Town on Friday night. Mansfield looked to have snatched a late draw until Elliott Nevitt struck five minutes into stoppage time to end the Stags 14 game unbeaten run in the league.

Struggling Scunthorpe had hoped their luck was turning when Joe Nuttall gave them an early lead against fellow strugglers Colchester United. Things soon turned sour though when Luke Matheson picked up a second yellow card 10 minutes before half time. This appeared to spark the U’s into life as two Noah Chilvers goals and a Owura Edwards goal secured them a 3-1 away win pushing them eight points clear of safety.

Oldham needed a win after a devastating defeat against fellow strugglers Carlisle last time out with Swindon looking to pick up a decent run going into the latter part of the season.

In truth it was a poor game, the home side bossed throughout, although Oldham were hampered with disciplinary issues, picking up eight yellow cards if you include full-back Jordan Clarke’s late second yellow card.

It looked destined to be 0-0 until Ellis Landolo’s brilliant free kick was headed home by Dion Conroy well into the fifth minute of stoppage time.

The late goal moved the Robins up into 6th. That’s a position Oldham can only look at with envy, as only themselves and Scunthorpe prop up the division. 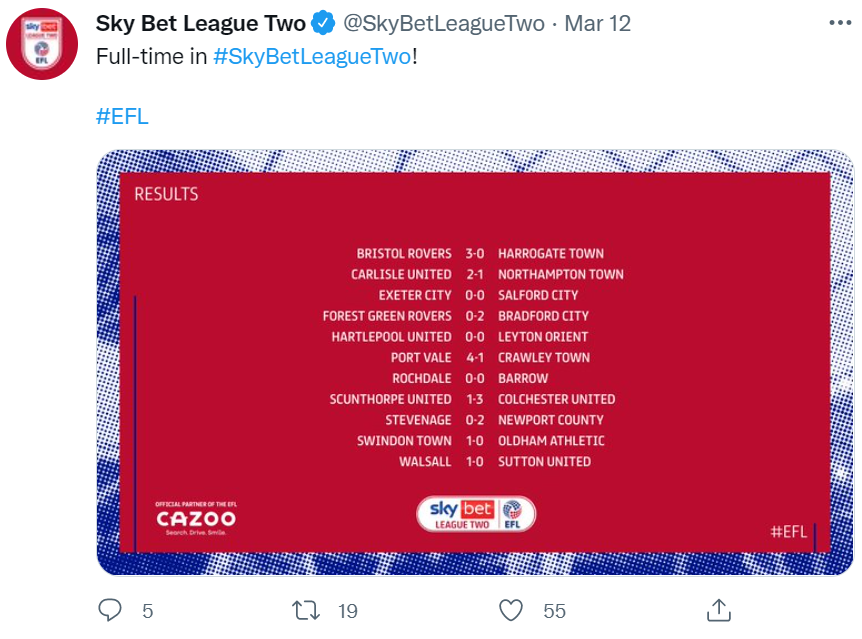 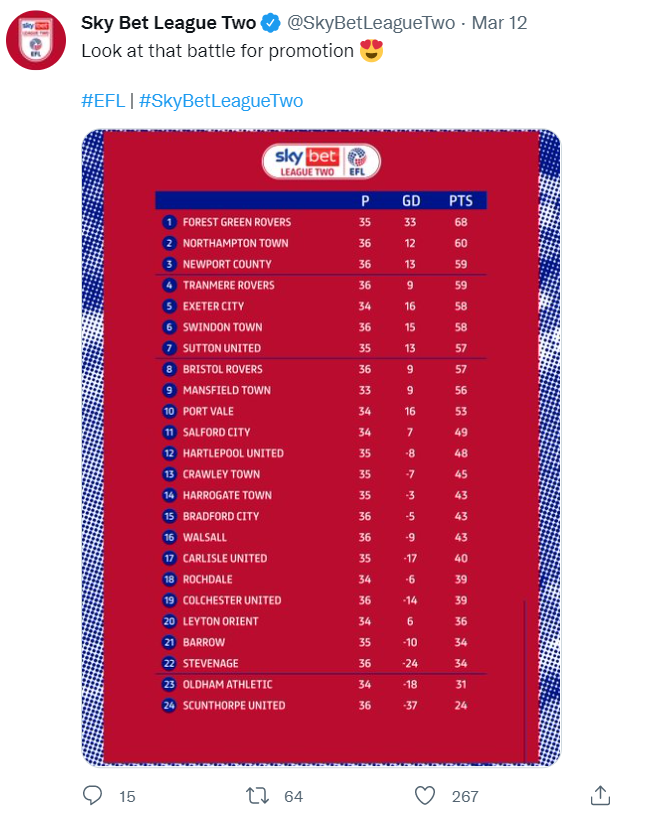