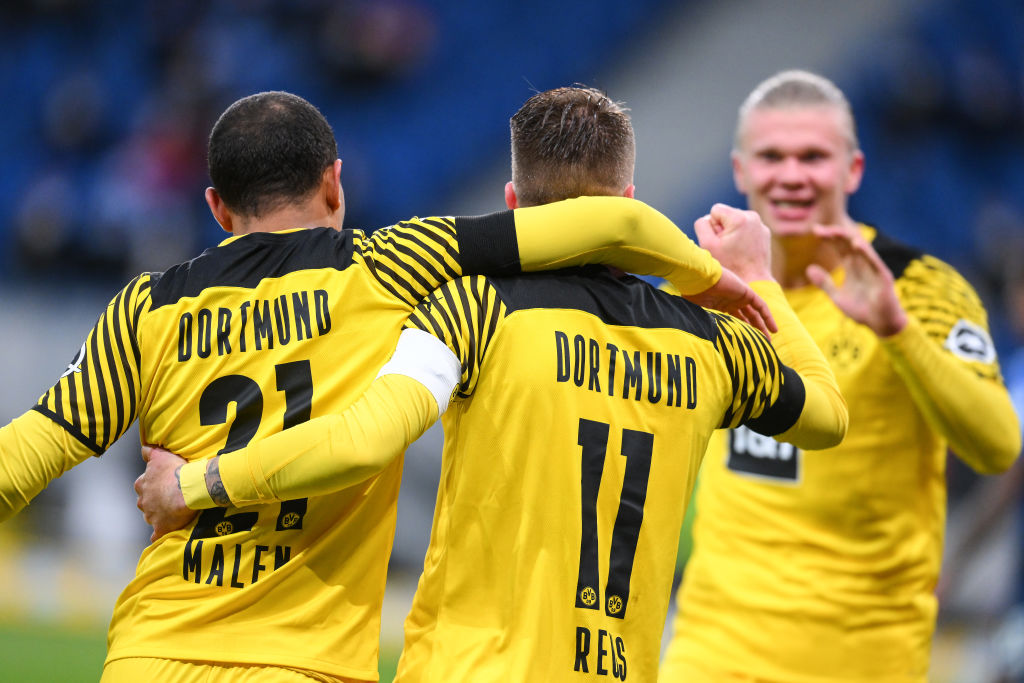 It was another action-packed weekend of action in the Bundesliga, where grounds still remain empty due to Covid-19 measures. There are relegation changes, top-four changes and the development of the title race. Here’s the table after 20 rounds of German football…

There’s movement on the #Bundesliga table after MD20… but is it 🔼 or 🔽 for your side? 😬 #BLMatchday pic.twitter.com/NhCyiW49uV

Marco Rose’s Dortmund kept up the pressure on leaders Bayern with a clinical win at Champions League-chasing Hoffenheim. This fixture usually provides goals – only once have these sides played out a goalless draw – and the sides repeated the 3-2 scoreline from the dramatic Hinrunde clash in August.

It was not a day for goalkeepers, all four shots on target resulted in goals. Erling Haaland scored his 16th goal of the campaign to put the visitors ahead in the sixth minute, assisted by Donyell Malen – his first of three assists for the afternoon. Andrej Kramaric equalised on the stroke of half-time after Hoffenheim had twice hit the woodwork.

Marco Reus was next to benefit from Malen’s creativity, restoring Dortmund’s lead after 57 minutes. It was 3-1 in the 66th minute, Malen’s run and cross forcing David Raum finish past his own goalkeeper. Georgino Rutter set up a nervy end for Dortmund, scoring after an excellent pass by Munas Dabbur. Sebastian Rudy could have snatched a point in the last minute, but his shot went just past the post.

Borussia Dortmund’s win did come at a cost: Erling Haaland withdrawn in the 63rd minute due to injury, the full extent of which is not yet known. Hoffenheim fall to 7th in the table but just four points from Bayer Leverkusen in 3rd.

It was another comfortable away day for Bayern Munich, following up 5-0 and 4-0 wins at Stuttgart and Köln with another four goals and three points in the Capital. The visitors welcomed back Lucas Hernandez, Kingsley Coman, and Benjamin Pavard as they continued to return to full strength following recent Covid and injury concerns.

The Champions dominated the first half, registering 16 shots on goal and enjoying 72% possession. Corentin Tolisso had the ball in the net in the 3rd minute, but the player’s subdued celebration hinted to the goal being ruled out for offside, which it was after a VAR check. Tolisso did finally celebrate with more conviction when he headered Kingsley Coman’s cross past Alexander Schwolow in the 25th minute; the French international scoring for the second week in a row. Thomas Müller added a second before half time to better reflect Bayern’s dominance.

Hertha’s Vladimir Darida somehow failed to score from six yards before his defence gifted Bayern a third goal. Schwolow had an excellent game in goal for Hertha, making 14 saves, but his under strength pass was latched onto by Leroy Sané to score into the empty net and put the game beyond the hosts. Serge Gnabry made it 4-0 before Jurgen Ekkelenkamp took advantage of a slack pass by Dayot Upemecano to score a consolation goal.

Bayern’s win restored their lead at the top to six points, whilst Hertha sit in 13th place just three points clear of the relegation places.

The bottom side have given themselves hope of a remarkable escape as they continued an improvement in form to make it only one defeat in six games. Goals from Jeremy Dudziak and Mainz’s Stefan Bell gave Fürth a 2-0 lead before Karim Onisiwo added the visitors a consolation deep into injury time. Fürth have picked up five points three matches into the Rückrunde, equalling their total from the 17 game Hinrunde, and have moved within nine points of 16th placed Augsburg. However, guaranteed safety in 15th place will require overcoming an 11-point deficit.

Bielefeld have strengthened their chances in the relegation battle as they recorded their third win in an unbeaten run which now extends to five games. The visitors raced into a two-goal lead after only 27 minutes as they took advantage of a lacklustre Frankfurt performance. The opener came after only four minutes, Patrick Wimmer firing a left-footed shot into the corner of Kevin Trapp’s net after a well-worked team move. Wimmer, who also scored in the previous meeting between the teams this season, would turn provider for the second, as his Rabona cross caused confusion in the Frankfurt defence and was finished via the chest of Alessandro Schöpf. The Austria U21 international now has three goals and five assists for the season.

Eintracht had chances in the first half but found Arminia ‘keeper, Stefan Ortega, in fine form. The home side had 68% possession and 18 attempts at goal, but Bielefeld looked comfortable in seeing out the match. Stefan Ortega produced a big save from Rafael Santos Borré in the 94th minute to maintain his clean sheet.

Oliver Glasner’s Frankfurt side are now three games without a win, reverting to their poor early season form and falling back to 9th. Bielefeld have risen to 14th and moved two points clear of the drop zone.

Moussa Diaby claimed a hat-trick in his side’s convincing win over Augsburg. The visitors, who have never won a competitive game against Leverkusen, had already lost to their opponents 4-1 in August. It was therefore no surprise that the hosts were ahead within nine minutes thanks to Karim Bellarabi, before Moussa Diaby doubled the lead in the 24th minutes.

Just after the hour mark, Arne Maier gave Augsburg hope of a comeback, scoring from close range after Lukáš Hrádecký spilled Jeffrey Gouweleeuw’s free kick. However, Augsburg could not cope with the pace, passing and movement of Leverkusen. Moussa Diaby scored twice in four minutes, completing his hattrick in the 69th minute. The 22-year-old Frenchman has eight goals and six assists in 18 appearances this season.

Leverkusen remain third in the table, recording back-to-back wins in their recovery from a dip in form. Augsburg drop into the relegation play-off spot, having won just once since their surprise victory over Bayern Munich back in November – a run of five games without a win.

Union Berlin claimed another important win as they moved clear in fourth place following Hoffenheim’s defeat to Borussia Dortmund. The result also piles the pressure on Adi Hütter; his Gladbach side sit just three points from safety following back-to-back defeats. Max Kruse put Union ahead in the 18th minute converting from the penalty spot after Denis Zakaria was adjudged to have handled the ball. Kouadio Koné equalised for Gladbach with an excellent finish from outside the box. Gladbach had the better chances in the second half but failed to take any of them. They were duly punished when Max Kruse grabbed the winner six minutes from time.

Elsewhere in the Bundesliga…

Bochum and Köln played out a 2-2 draw with both sides giving up leads in the game. Freiburg added to Stuttgart’s miserable run with a 2-0 victory through a Hiroki Ito own goal and Kevin Shade’s second half strike. Stuttgart, who remain firmly in relegation strife in 17th place, are without a goal in five Bundesliga games. Freiburg keep in touch with the top four – one point behind in 5th. RB Leipzig celebrated a third league win in a row, defeating Wolfsburg 2-0. RB’s return to form moves them into the European spots and back in the hunt for Champions League football. Wolfsburg fall to 15th in the table, two points clear of Augsburg in 16th.