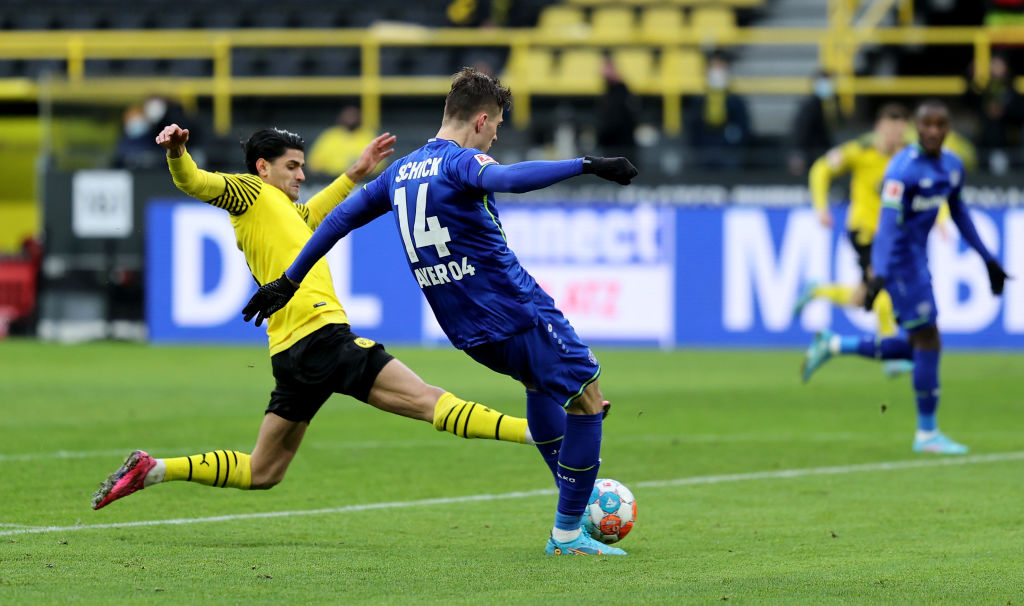 The Bundesliga returned this weekend, with a number of results having huge implications across the league. At one end, hopes of a title challenge are diminishing, but there is plenty to play for further down the table.

Bayern welcomed RB Leipzig on Saturday evening knowing they had the chance to stretch their lead at the top of the table to nine points ahead of Dortmund’s match with Bayer Leverkusen on Sunday.

RB had never won away to Bayern, but were unbeaten in their last two trips to the Allianz Arena. After an inconsistent patch, new coach Domenico Tedesco had guided Leipzig to three successive league wins and back into the battle for Champions League qualification.

Within two minutes though, Bayern had taken the lead after Tolisso dispossessed Willi Orbán, allowing Müller to latch onto Lewandowski’s saved effort. Fifteen minutes later, it was Bayern’s turn to be careless in possession. Tolisso’s heavy touch was seized upon by Christopher Nkunku, who drove forward, allowing Konrad Laimer to send the ball across goal for André Silva to poke over the line. 1-1.

Lewandowski made it 2-1 before the half-time break after expertly meeting Kingsley Coman’s inch-perfect cross. It was the Pole’s 24th league goal of the season.

Just eight minutes into the second half, Nkunku helped draw his side level, guiding the ball past Neuer for his 10th goal of the season. But as ever with Bayern, parity was short-lived for Leipzig. Again, an attempt to play out from the back was punished by a smart combination of Coman, Gnabry and – unfortunately – Leipzig defender Gvardiol, who turned the ball into his own net.

Bayern Munich have now won eight of their last nine and visit Bochum next weekend. Leipzig remain in the battle for the top four and will welcome FC Köln.

It was second versus third in Dortmund on Sunday, the hosts knowing a win was necessary to keep the pressure up on the league leaders. Dortmund had come out on top when the sides shared seven goals the last time they met. It was the visitors who came out comfortable winners here, scoring five for the second game in a row.

Dortmund had to make do without Erling Haaland, the striker not yet recovered from a knock picked up against Hoffenheim. Despite a couple of consolation goals from BVB, they didn’t threaten Leverkusen much during the game and could not deal with the counter-attack in particular – conceding from two of Leverkusen’s five breakaways. The absence of Haaland was clear for all to see: Dortmund were limited to shots outside the area and failed to make their possession in the game anything other than passive.

The goal of the game came from Jonathan Tah: a spectacular volley from around 16 yards out.

Relegation-threatened Stuttgart welcomed inconsistent Eintracht Frankfurt to the Mercedes-Benz Arena on Saturday afternoon. Both sides were winless in 2022, Stuttgart failing to score in any of their last five matches.

After a back-and-forth battle, Eintracht claimed the points in the 77th minute when Hrustic’s shot was deflected in via Konstantinos Mavropanos.

Stuttgart’s relegation problems deepen, as they find themselves four points adrift in 17th, whilst Eintracht are 9th, but just three points from Champions League qualification.

This was a win for Mainz which signalled a new record for the club; the first time they have kept four home clean sheets in a row in the Bundesliga.

Substitute Jae-Sung Lee emphatically netted his fourth of the season in the 79th minute, and the second arrived only four minutes later as Moussa Niakhaté put away a penalty for his second goal of the season.

Anthony Modeste’s 14th goal of the season was enough to see off Freiburg and move his side up to sixth in the table. Freiburg remain fifth after a difficult run of three wins in ten games. The winner came in the 23rd minute as the Frenchman finished a Koln breakaway.

Union suffered their first defeat of 2022 and handed Augsburg their first home win since November in this game, as Union continue to miss Max Kruse – who completed a transfer to Wolfsburg in January.

Augsburg remain in the relegation play-off place despite the win, but they have opened up a four-point gap on Stuttgart. They can go above 13th placed Gladbach with a win when the sides meet at the weekend. Union remain fourth as other results went their way in the European battle.

Elsewhere in the league…

The final standings after Matchday 2⃣1⃣ are in. 📊

Did your team move ⏬ or ⏫? 🤔 pic.twitter.com/SWMJ5wTRnZ

Hertha and Bochum shared a point each in a 1-1 draw on Friday night. Hertha remain just a point clear of relegation danger, but Bochum are only three points clear, despite being 11th in the table and just seven points off a European place.

Alassane Pléa’s cancelled out Bielefeld’s Janni Serra’s spectacular opening goal as Borussia Mönchengladbach and Arminia played out 1-1 draw. Both sides are deep in the relegation struggle, Gladbach are 13th, but just a point ahead of the relegation play-off spot. Bielefeld, now unbeaten in six, are 15th, clear of Augsburg on goal difference. It is three without a win for Gladbach, despite Adi Hütter’s side having 61% possession and 21 shots on goal.

Wolfsburg finally recorded a win beating Greuther Fürth 4-1, ending a run of nine games without victory. They climb to 12th, three points ahead of Augsburg. Fürth lose for the first time this year and find themselves 12 points from safety.