Bundesliga round-up: Dortmund close gap on Bayern; Freiburg held to draw; Leipzig back in the goals 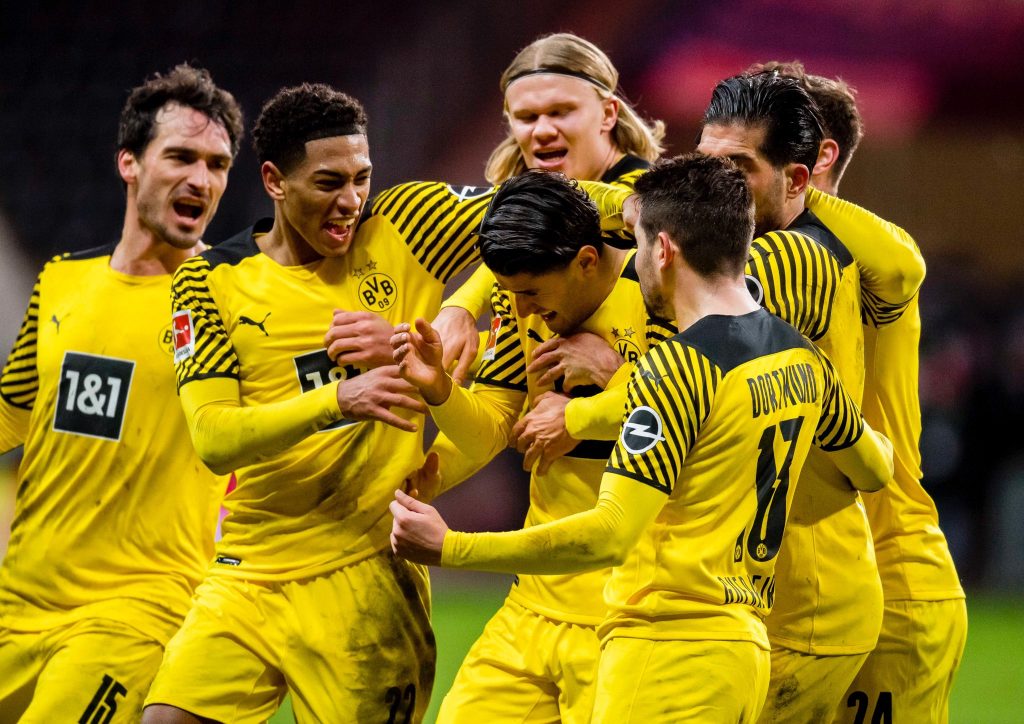 The Bundesliga returned this week, disappointingly with few fans in stadiums due to Covid-19 restrictions, but the weekend offered up shocks, comebacks, and 30 goals.

Friday night kicked off the action as an injury and Covid-hit Bayern welcomed Gladbach to the Allianz Arena. The two sides share a rich history as title rivals going back to Gladbach’s golden years in the 1970s. Whilst the two sides may enjoy differing levels of success in the modern era, Gladbach have gained a reputation as Bayern’s bogey team; five wins and a draw in the 10 previous meetings between the sides, including the famous 5-0 DFB Pokal victory in October.

The Champions were missing a host of key players including Manuel Neuer, Dayot Upamecano, Lucas Hernandez, Alphonso Davies, and Leroy Sané. Julian Nagelsmann was forced to field a makeshift defensive line-up; Joshua Kimmich slotting in at right back and Marcel Sabitzer on the other side. Additionally, the Bavarian’s substitutes featured several teenagers; one of whom, Paul Wanner, would come on to become the club’s youngest ever player, having only turned 16 at the end of 2021.

There was however a familiar look to the match after 17 minutes when Thomas Müller was the provider for Robert Lewandowski to put his side in front. The game was turned on its head as Gladbach hit back with two goals in four minutes, Florian Neuhaus and Stefan Lainer each taking advantage of slack Bayern defending. There was still time left in the first half for Sven Ulreich to prevent 3-1, saving well from Breel Embolo, before Robert Lewandowski and Thomas Müller were prevented from equalising by the woodwork and Matthias Ginter.

It was a frustrating second half for the home side, the crossbar and Yann Sommer again keeping out a leveller. Alassane Pléa could have put the game beyond doubt for Adi Hutter’s side but fired wide.

Next up for Bayern is a trip to Köln, where they have not lost in 11 years, but the Billy Goats have won three games in a row, and it remains to be seen how many of Bayern’s missing stars will be available to make the journey.

Dortmund turned up in Frankfurt for the Saturday evening kick-off knowing they could reduce the gap at the top following Gladbach’s win in Munich. Without an away league win against Eintracht since 2013, and uninspiring form to conclude 2021, a successful night for Dortmund was anything but a foregone conclusion.

Kevin Trapp was in goal for Frankfurt in Dortmund’s 2013 win, and the 31-year-old produced a superb save in the second minute, tipping Thomas Meunier’s shot onto the post. Dortmund had started the better side, but it was Eintracht who took the lead after 15 minutes with their first shot on goal through Rafael Santos Borré. Nine minutes later, it was 2-0. Dortmund showed signs of the defensive frailty that has cost them already this season, allowed Rafael Santos Borré to net again.

The game would turn on its head in the final twenty minutes, but Eintracht should have been clear; Evan Ndicka hit the post before half-time and Jesper Lindstrom failed to convert when through on goal. Thorgan Hazard was introduced to the game after 65 minutes and scored five minutes later. Dortmund completed an unlikely turnaround as Jude Bellingham and Mahmoud Dahoud each scored in the final four minutes to take all three points.

Eintracht Frankfurt’s collapse sees them drop to 8th place, the win would have seen them end the weekend in 5th place and well placed in the battle for the Champions League places. Frankfurt will look to bounce back in Augsburg, at a venue they have won at in two of their last three visits. Dortmund are now within six points of Bayern Munich and have reignited hopes of a title race and have the opportunity to pile the pressure onto the Champions in the midst of their selection issues. Freiburg are the visitors to the Westfalenstadion on Friday night, BVB can close the gap to three points prior to Bayern’s match on Saturday.

This season’s surprise package, SC Freiburg, suffered a disappointing second-half collapse against relegation threatened Bielefeld. The visitors finished the Hinrunde strongly, beating Bochum and RB Leipzig, but were behind thanks for Janik Haberer’s 6th minute strike.

Frieburg doubled their lead immediately from the restart after the break as Woo-Yeong Jeong’s beat Stefan Ortega in goal. It seemed Freiburg would see the game out comfortably, but this notion evaporated when Masaya Okugawa powered home a shot from outside the area. The newfound belief of the 17th placed side saw them put on a much better second half showing. They were rewarded when Bryan Lasme, a second-half substitute, scored from a tight angle, although Freiburg goalkeeper Benjamin Uphoff should have done better.

Freiburg remain in the top four but will rue the dropped points ahead of their match in Dortmund. Bielefeld are now unbeaten in three, moving within a point of automatic safety, will go into their next match against Greuther Fürth confident of extending their run.

RB kicked off their Rückrunde with a much-needed win, overcoming visitors Mainz, who had to play over 70 minutes with 10 men. Alexander Hack was sent off after using an arm to block André Silva’s shot in the penalty box, the Portuguese finishing from the resulting spot-kick.

It was 2-0 within two minutes of the second half, Dominik Szoboszlai surviving a VAR check. Jae-Sung Lee pulled a goal back for Mainz, but Christopher Nkunku, a half-time substitute, restored the two-goal advantage, after he also provided the assist for Leipzig’s second. Three minutes after Nkunku’s goal, Silva added his second to make it 4-1. It threatened to become a rout but there would be no Fürther scoring.

Leipzig will aim to make it consecutive wins when they visit Stuttgart next, whilst Mainz welcome Bochum.

All the movers and shakers after #BLmatchday 1️⃣8️⃣

Is your #Bundesliga team moving 🔺 or 🔻 the table? pic.twitter.com/3kuOOz2U8C

Bayer Leverkusen rescued a point seven minutes from the end thanks to Jonathan Tah to draw 2-2 at home to Union Berlin. Patrick Schick gave Bayer the lead but a Grischa Prömel double either side of half-time had put the capital club in front. Bayer are now without a win in four games. Hoffenheim have moved up to 3rd after they came from behind to beat Augsburg 3-1, Ihlas Bebou’s double and a late David Raum goal cancelling out Michael Gregoritsch’s early opener.

Anthony Modeste, Ondrej Duda, and Jan Thielman were the scorers at Köln defeated Hertha 3-1 in Berlin. Köln’s three wins in a row see them in the battle for the top four, whilst Hertha are in 13th only three points safe of relegation danger. Wolfsburg are similarly struggling in the league and are in disastrous form, they lost 1-0 at Bochum, Miloš Pantović with the goal as Die Wolfe suffered their sixth successive league defeat. Relegation battlers Greuther Fürth and Stuttgart played out a 0-0 draw, as both sides missed chances to win. The point enough to move Stuttgart out of the relegation play-off place.