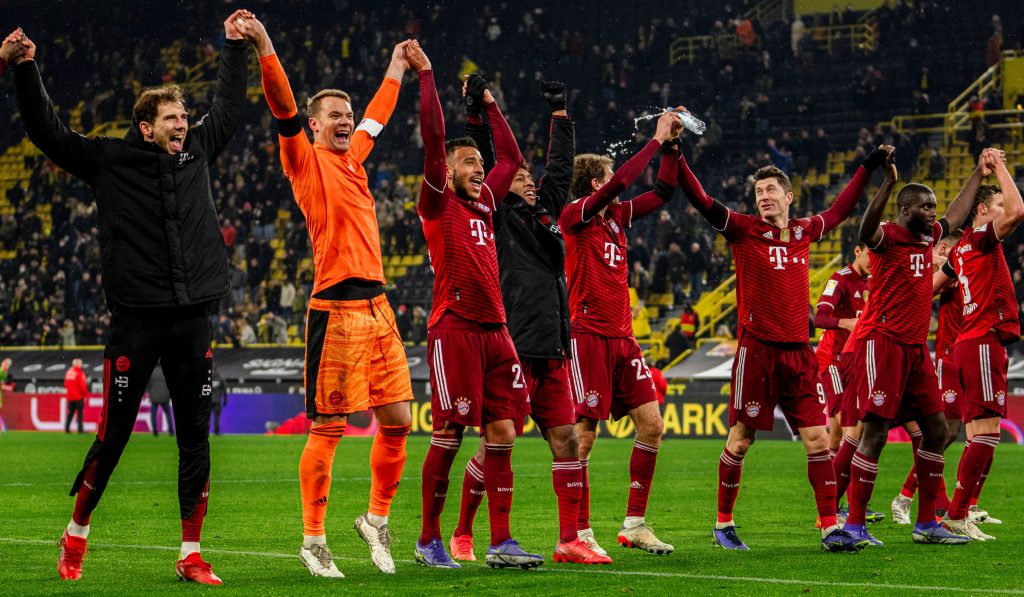 Der Klassiker lived up to its name as Bayern Munich claimed all three points in a five-goal thriller at Borussia Dortmund. Bayern went into Saturday evening’s game just a point ahead of Dortmund in the Bundesliga table. The winner would end the weekend top of the league.

The opening ten minutes set the tone for an end-to-end encounter. Barely five minutes were on the clock when Julian Brandt put Dortmund 1-0 in front. England international Jude Bellingham provided the ball, and Brandt did superbly to beat Alphonso Davies with a powerful right-footed shot past Manuel Neuer.

In the ninth minute – as we have seen in many previous derbies – Dortmund were the makers of their own downfall. There appeared to be little danger when Mats Hummels was in possession on the halfway line, but the experienced defender took too much time on the ball and was charged down by Thomas Muller. Muller burst forward, allowing Robert Lewandowski to take over, drive into the box and finish into the bottom right corner. 1-1.

Dortmund were living dangerously. Emre Can’s careless pass across his own penalty area went straight to Kingsley Coman, whose shot was deflected over the bar.

Erling Haaland fired out a warning shot as Dortmund threatened on the break. The Norwegian’s left footed shot pulling just wide of the far post.

Just two minutes before half-time, Bayern were 2-1 ahead, but it was another disaster at the back for Dortmund. Alphonso Davies’ cross-ball was missed, and Lewandowski could not connect, but Raphael Guerreiro’s attempted clearance ricocheted off Mats Hummels. Kingsley Coman composed himself, and his shot deflected into the net via Marco Reus.

Dortmund came out firing after the restart. Thomas Meunier’s cross was allowed to run by Dayot Upamecano. Bellingham was again the provider, as he fed Haaland who curled his shot expertly off the inside of Neuer’s post.

The home side pressed on and had their own penalty appeals turned down before the game again swung, controversially, in Bayern’s favour. Mats Hummels was again the unfortunate party as, unsighted and stumbling behind teammate Bellingham, he cleared a Bayern corner with his arm. There were no claims from the visitors, but after VAR review, a penalty was awarded, and Lewandowski duly converted after 78 minutes.

Injuries to Julian Brandt and Lucas Hernandez meant there were ten minutes of additional time. Dortmund threw everything in search of the equaliser, but it was Bayern who came closest; Corentino Tolisso shooting wide from forty-yards as the goal was gaping after ‘keeper Gregor Kobel had gone forward for a 99th minute corner.

The Key Players and Numbers

It was a familiar story; this was Bayern’s sixth straight league Klassiker victory. Dortmund have only won one of the last ten league meetings between the sides – a 3-2 victory in November 2018.

Much of the pre-match conversation focused on Haaland v Lewandowski; Haaland, returning from injury, had scored 10 goals in eight games, the Poland international had 14 goals in 13 games. The stats show that Bayern did a better job of getting their star man in the game. Lewandowski had five attempts at goal to Haaland’s three; 46 touches of the ball compared to 27 for the Dortmund man; and crucially, two goals to the Norway striker’s one. 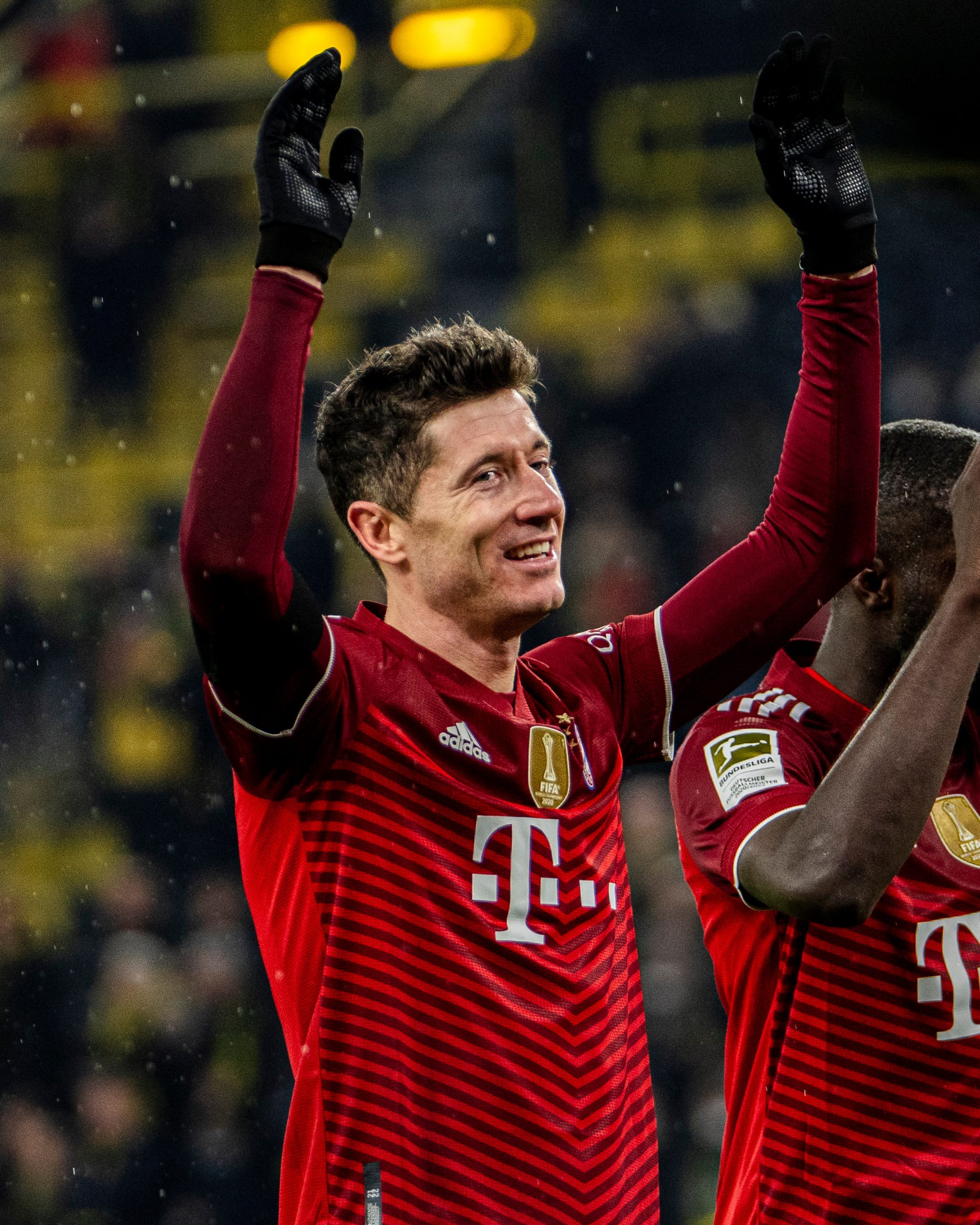 However, the game was ultimately decided by the errors of Hummels, Guerreiro and the referee, Felix Swayer. Dortmund had put themselves in a strong position but gifted the lead away; their defensive errors resulted in half of Bayern’s shots on target, and all of Bayern’s goals.

Bayern Munich have moved four points clear at the top and it is difficult to see them being prevented claiming a tenth successive league title. At the same stage last season, Bayern were top with a lead of just two points over RB Leipzig – this gap was 13 points by the end of the season. Two years ago, Bayern were in seventh – seven points behind leaders Borussia Monchengladbach. They still ended the season as champions. Bayern Munich have not amassed as many points after 14 games (34) since 2015/2016 (40).

Dortmund are the realistic challengers to the status quo this season, with third-placed Leverkusen seven points off the top. Die Schwarzgelben struggle on the road: they have lost three times on their travels already this season, placing them sixth in the away league table. The manner of the defeats has also been noteworthy, turning in a poor performance for struggling RB Leipzig to deservedly win 2-1, failing to record a shot on target in a 1-0 defeat at ‘Gladbach, and defensive frailties on display despite dominating the opening day fixture at Freiburg. It also remains to be seen if Erling Haaland can be kept fit after picking up a couple of injuries already this season.

Bayern Munich are not invincible, they have fallen to defeat away to Augsburg and at home to Eintracht Frankfurt. But no other team has been able to capitalise. The recent Bundesliga success stories – RB Leipzip, ‘Gladbach and Eintracht Frankfurt – are all languishing in the bottom half of the table, and as the former powerhouses of Hamburg, Werder Bremen, and Schalke struggle in the second tier, the outlook for a change of name on the Bundesliga Meisterschale is bleak.