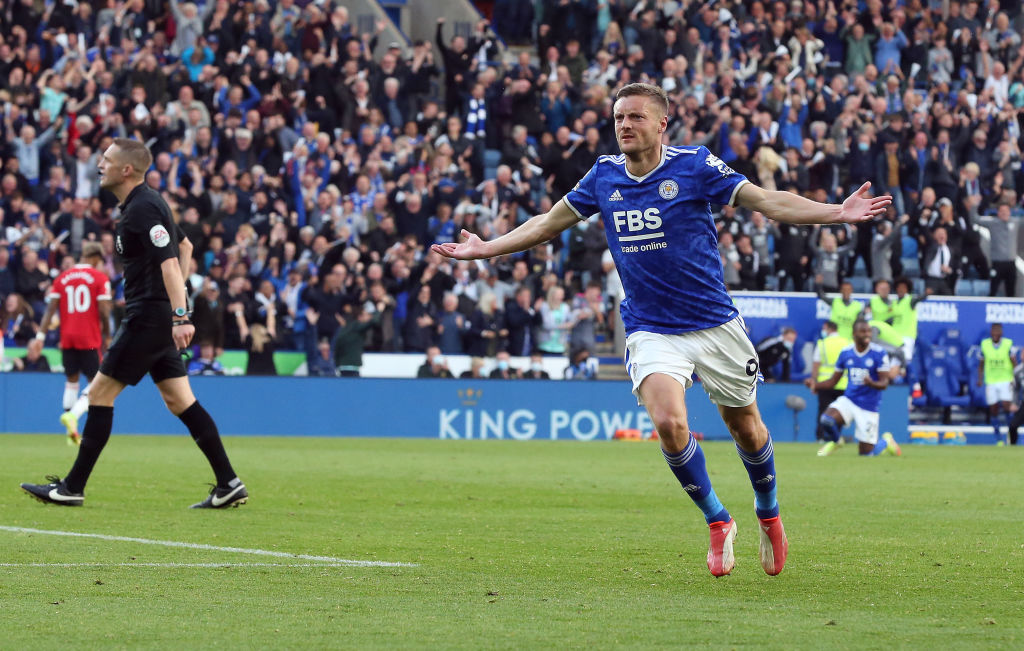 Leicester City piled the pressure on Ole Gunnar Solskjaer with a thrilling 4-2 win at the King Power stadium.

After a strong opening from Leicester that forced the Reds back, United then took the lead with a goal out of nothing.

Bruno Fernandes found Greenwood on the right-hand side. United’s young star cut on to his stronger left foot and unleashed a shot that found the top left corner, well out of reach of Kasper Schmeichel.

It was Greenwood’s fourth league goal of the season. United’s early goal didn’t dishearten Leicester and Brendan Rodgers’ side were back in the game within 12 minutes.

Harry Maguire was brought back into the United squad earlier than expected due to an injury that was picked up by Raphaël Varane on international duty.

The United captain did not look up to speed and was caught in possession by the ever energetic Kelechi Iheanacho. Iheanacho was able to cut the ball back to Youri Tielemans, who was able to loft the ball over David De Gea from 18 yards out to ensure Leicester were level as they headed into half time.

The second half started slow and neither side were able to take the game by the scruff of the neck. Despite a match with few goal scoring opportunities, it burst into life with 15 minutes to go.

Pressure was being applied by Leicester and they were finally rewarded in the 78th minute. A well whipped in corner was met by Patson Daka, his low shot was saved by De Gea but Çağlar Söyüncü was on hand at the back post to give Leicester the lead.

Despite Leicester taking a late lead, Manchester United were back level within a few minutes thanks to the return of Marcus Rashford.

A measured ball over the top from Victor Lindelöf was latched on to by Marcus Rashford and his powerful strike flew past Schmeichel.

Leicester did not let the equaliser take them out of their stride and they regained the lead with a goal straight from kick-off.

Ayoze Pérez found himself with space on the left wing and his cut back fell to talisman Jamie Vardy, who smashed a superb volley into the top corner, restoring Leicester’s lead a mere minute after United’s equaliser.

An excellent win for Leicester will give them a well needed confidence boost as they head into a busy month within their season.

They have lost four of their last seven games in all competitions and it will only get more difficult as they face Liverpool at home next Sunday after a midweek Champions League game against Atalanta.

Claudio Ranieri’s first match in charge of Watford ended in a 5-0 defeat to a relentless Liverpool side.

From the first whistle Liverpool were on top of Watford and Mohammed Salah was causing issues for Danny Rose.

In the 12th minute, Salah was able to out-muscle Rose and play a cutting through ball with the outside of his left foot.

The ball was executed to perfection and fell straight into the path of Sadio Mané, giving him the opportunity to slot away his 100th goal in the Premier League.

The Egyptian picked the ball up on the edge of the box, surrounded by Watford defenders.

Salah’s quick feet and speed allowed him to create space between the back line and manoeuvre his way into the danger area.

A cut back onto his left foot and a curled effort left Ben Foster with no chance as it nestled in the far corner. A truly exceptional goal following his similar effort in Liverpool’s crunch match with Manchester City two weeks ago.

High tempo and quick movement of the ball left Watford chasing shadows all afternoon as Liverpool eased past the Hornets.

Well worked moves found Roberto Firmino in plenty of space in the box on a number of occasions as he scored three instinctive tap-ins.

That will be a confidence booster for the Brazilian as he looks up to the challenge to fight for a starting spot with Diogo Jota.

Watford lacked any purpose and were outplayed. Defensively they looked weak, and it appears to be a tough task for Claudio Ranieri to steady the ship.

A rather dull first half found neither side able to break the deadlock with few and far chances between.

Despite a lack of chances in the first half, the game sprung to life in the second with Aston Villa coming out of the blocks and taking a two-goal lead.

Danny Ings was back on the scoresheet after a well crossed ball from John McGinn found the Villa striker six yards out, and his directed header was out of reach of José Sá.

20 minutes later, John McGinn was the one on the score sheet after his strike from outside of the box took a deflection and nestled in the bottom left corner.

With 80 minutes on the clock and Aston Villa looking comfortable, Wolves somehow summoned something special to spark a famous comeback.

They were finally able to beat Emiliano Martínez after Roman Saïss was at the back post to knock the ball home from a set piece, giving the away side a new lease of life.

Five minutes later, another set-piece lead to club captain Conor Coady scoring only his second goal in the Premier League, drawing his side level with minutes left to play.

Wolves refused to settle for a point and in the last minute of added time Adama Traoré was fouled on the edge of the area.

Rúben Neves stepped up and with what looked to be the final kick of the game, his well hit free kick was deflected off Matt Targett, leaving Martínez helpless and securing a famous comeback victory for Wolves.

A huge win for Wolves will leave their fans delighted with the spirit on show and an important three points moves them into the top half of the table.

Harry Kane was able to break his Premier League duck as Steve Bruce’s 1000th managerial game looked to be his last at the reins of Newcastle United.

Chelsea survived a late onslaught from Brentford thanks to Édouard Mendy’s heroics. The Chelsea keeper was in fine form leaving Brentford frustrated and ensuring the Blues made the short trip home with a 1-0 victory after Ben Chilwell’s strike.

Manchester City eased past Burnley with a 2-0 victory. Burnley are still looking for their first win of the season as they sit in the bottom three eight matches into the campaign.

Southampton earned their first win of the season with an important 1-0 victory over a depleted Leeds United.

Once again, Leeds United were a shadow of themselves and lacked real intent, but they were without key players such as Kalvin Phillips, Raphinha and Patrick Bamford.

West Ham secured a 1-0 victory away at Goodison Park thanks to Angelo Ogbonna’s second half header, whilst Norwich played out a 0-0 draw at home against Brighton.

Player of the week – Mohammed Salah

For the second game day in succession, Mohammed Salah is named as the player of the week.

It is hard to ignore Salah’s performances and importance to this Liverpool side; the Egyptian has probably been the best player in the world this season but his future is still in doubt with the club yet to agree a new deal with the forward.