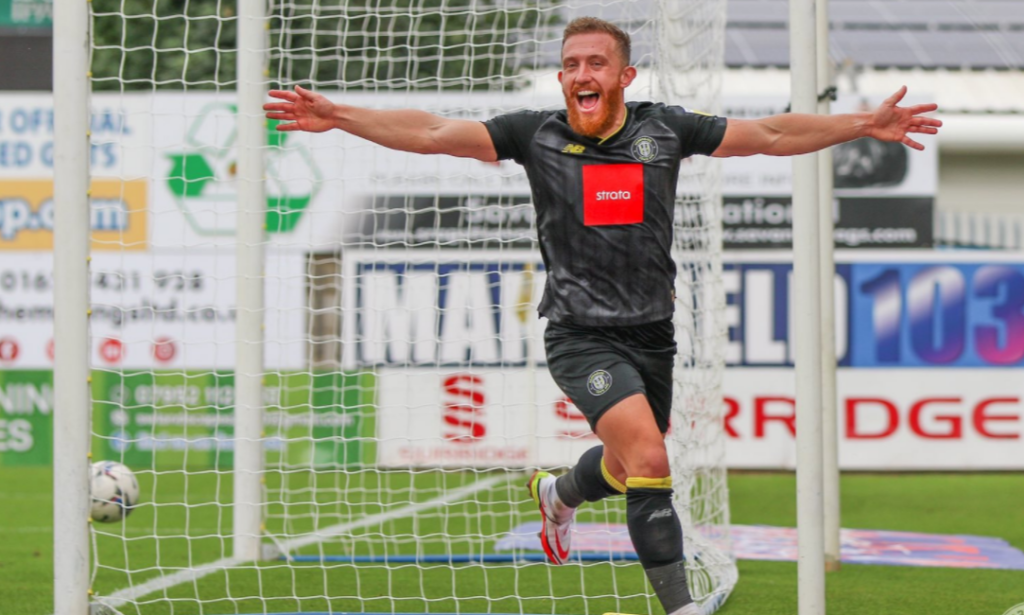 Forest Green Rovers couldn’t maintain their spot at the top of the League Two table as they could only draw 0-0 away at Exeter City. Rovers had numerous opportunities to take all three points from St James Park but neither Kane Wilson, Jamille Matt nor Billy Cargill could capitalise.

They have been overtaken at the top by Harrogate Town, who came from a goal down inside three minutes to beat Mansfield Town 3-1 at the One Call Stadium.

Luke Armstrong, Jack Muldoon and George Thomson were all on target for the unbeaten Yorkshire side, whose cause was helped further by the red cards shown to Ollie Clarke and Stephen Quinn with just over 15 minutes remaining.

Bradford City and Swindon Town both dropped points as they were each held to 1-1 draws by Walsall and Stevenage respectively.

Bradford will be disappointed not to have made the most of a man advantage against the Midlands side; Elliot Watt’s early opener was cancelled out by Jack Earing a minute before summer signing Joss Labadie was given his marching orders for a dangerous challenge on Gareth Evans.

Swindon needed a 95th minute penalty to salvage a point at Stevenage; Jack Payne doing the honours from the spot after Ben Coker had opened the scoring ten minutes into the second half.

The game was overshadowed after the final whistle as players from both sides squared up to each other.

Northampton Town continued their solid start to the season with a routine 2-0 victory at home to Scunthorpe United.

After Emmanuel Onariase was sent off after 20 minutes, it took until the second half to make their dominance count;

Danny Rose stabbing home just after the hour mark, before Sam Hoskins added further gloss to the scoreline in added time. Leyton Orient remain sixth in the table after an entertaining 2-2 draw at Newport County.

Orient twice took the lead in the “Justin Edinburgh Derby” through a Harry Smith brace either side of half time, cancelled out by a Matt Dolan penalty and a neat Dominic Telford effort 10 minutes from time.

Hartlepool cling on to the final play-off position despite losing 1-0 at Tranmere Rovers. Despite dominating the play, ‘Pool were punished for their missed chances in the 89th minute when Tom Davies headed home to give Rovers their first win since the opening weekend.

Carlisle United remain behind Hartlepool only on goal difference after goals from Brennan Dickinson and John Mellish were enough to secure a 2-1 win over struggling Salford City.

Barrow and Rochdale sit a further point back after they each scored three away goals at Oldham Athletic and Port Vale respectively.

Oldham fans made their feelings known at Boundary Park; after Ollie Banks, Offrande Zanzala and Joe Grayson’s free kick had secured Barrow’s 3-0 win, supporters invaded the pitch and made peaceful protests towards the owners.

Vale Park hosted a five-goal thriller; Jamie Proctor’s third and fourth goals in two matches not enough for even a point against Rochdale as Cory O’Keefe produced an unerring finish after Danny Cashman’s through ball to give his side a 3-2 win.

Leon Clarke made an immediate impact following his second half introduction, the veteran striker netting the only goal of the game 90 seconds into the second half.

Harrogate are top of the table having played a game fewer and are the only unbeaten side in the league after winning four of their first five games.

Forest Green are second on goal difference with Bradford in third. Oldham and Sutton sit in the bottom two places but Sutton have played just four games.