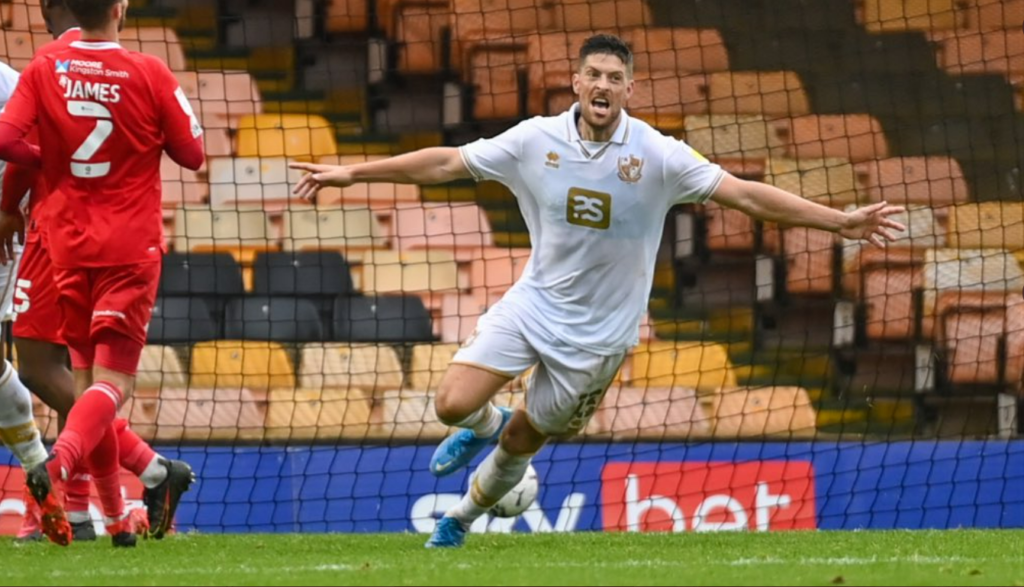 Forest Green Rovers maintained their four point lead at the top of League Two with a comfortable 2-0 away win at struggling Carlisle United.

An excellent performance on the road as Jamille Matt and Nicky Cadden secure the points.#WeAreFGR 💚

Rovers’ talisman Jamille Matt and winger Nicky Cadden scored the goals in the space of four minutes in the first half as Forest Green coasted to their seventh win in 10 games this season.

Harrogate Town made the relatively short trip to Greater Manchester and increased the woes of home side Oldham Athletic with a 2-1 win at Boundary Park to keep the pressure on the leaders with goals from Jack Diamond and Luke Armstrong.

It was their first win in five after a poor run of form.

Port Vale scored twice in injury time to turn the game on its head at Vale Park and secure a memorable 3-2 win at home to Leyton Orient.

It was their fourth win in a row which lifted Port Vale into an automatic promotion place leapfrogging their visitors in the process.

When Tom James put Orient 2-1 up with four minutes of the 90 to play it looked all over but Politic equalised on his Port Vale debut, before Jamie Proctor scored to spark joyous scenes.

Swindon up to fifth; Taylor derby ends all-square; Barrow into the play-offs

Swindon Town moved up four places to fifth with a comprehensive second half performance to come from behind against local rivals Bristol Rovers.

Rovers were 1-0 up at half time but goals from Jack Payne, a penalty from Ben Gladwin and Harry McKirdy saw the Robins to victory.

The match had added spice with Swindon manager Ben Garner returning to the club which sacked him 11 months ago.

Exeter and Walsall met at St James Park with the unusual circumstance of the two managers  having the same name.

Walsall’s Matt Taylor is new to the job this season but two goals from loanee George Miller saw them come from behind twice to grab a point at Exeter, whose own Matt Taylor has been manager there for three years now.

The result leaves Exeter in sixth and Walsall in 21st.

Barrow moved into the final play-off place with a narrow 1-0 away win at Mansfield Town with a second half penalty from Ollie Banks.

Bradford City also moved up to four places in the table to eighth continuing their unbeaten home record in the process with a 2-0 win over Rochdale.

Bradford easily have the biggest support in League Two with nearly 16,000 seeing them to victory.

Alex Gilliead put them 1-0 up in the first half and the points were secured with a 75th minute penalty from Andy Cook.

Tranmere Rovers kept up their impressive home record with a fourth win in five home games to take the points against Crawley Town with leaves Rovers in ninth.

Two goals from 39-year old striker Peter Clarke helped them to victory either side of an equaliser from Kwesi Appiah.

Sutton United won their first ever away game in the EFL at the fifth attempt in a 2-0 win at Northampton Town.

Goals from Joe Kizzi and Donovan Wilson either side of half time secured the win leaving Sutton just one point and one place behind the hosts in mid-table.

Newport County’s first game since they parted company with manager Mike Flynn ended in a splendid 3-0 win at home to bottom markers Scunthorpe United thanks to goals from Ollie Cooper, Courtney Baker-Richardson and Dom Telford.

In the day’s remaining games, Salford City won 2-0 at Colchester United and Stevenage beat Hartlepool United by the same scoreline.

The league table is extremely tight with just two points separating fourth place from 14th so any club can propel themselves into the promotion picture with a run of wins in what is shaping up to be another fascinating season in League Two.