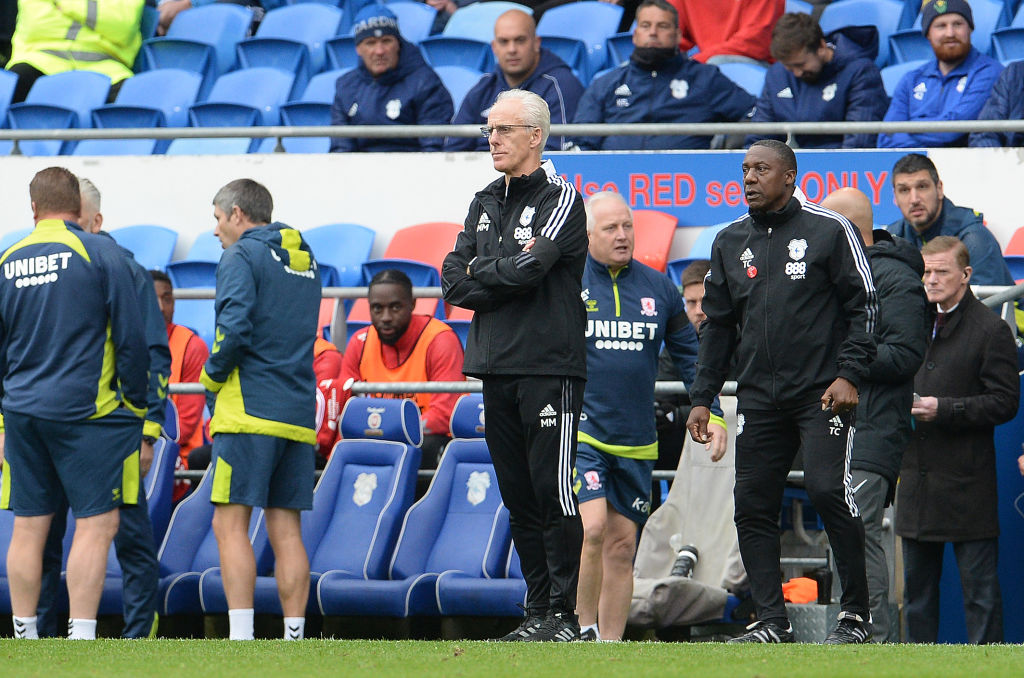 Neil Warnock’s return to the Cardiff City Stadium couldn’t have gone better as his side left with all three points and a third straight 2-0 victory, moving his side up to sixth in the table.

Mick McCarthy’s afternoon to forget started off with his side conceding a penalty in the 35th minute, after defender Mark McGuiness blocked Andraz Sporar’s volleyed effort with his arm.

Sporar then converted the penalty to give Middlesbrough a deserved lead.

Cardiff’s bad luck would strike again in the 54th minute with an Aden Flint header rebounding off the inside of the crossbar, their best chance of the afternoon sees the Welsh side moving to five games without scoring.

Martin Payero then put the nail in an otherwise buried coffin to seal Cardiff and Mick McCarthy’s fate in the 74th minute. It was the Argentine’s first goal of the season, securing all three points for Middlesbrough.

Bournemouth defeated Huddersfield 3-0 on Saturday to move to 14 games undefeated (won 10, drawn four), while keeping their eighth clean sheet of the season.

Dominic Solanke moved to 10 goals for the season after grabbing himself a brace, with Lloyd Kelly also getting on the scoresheet.

Oliver Turton brought Dominic Solanke down inside the box in the eighth minute following a delightful chipped pass over the defence from Lloyd Kelly. Solanke would then step up to calmly slot the penalty away sending the keeper the wrong way.

It wasn’t long before Dominic Solanke would find himself on the scoresheet again, doubling Bournemouth’s lead in the 21st minute.

The striker lost his marker and finished confidently after Philip Billing’s cushioned header down to him.

Lloyd Kelly would then wrap up proceedings in the 64th minute with an acrobatic volley to turn in Ryan Christie’s cross, a first of the season for the Bournemouth skipper a much-earned reward for his strong start to the season for the Cherries.

Following six straight wins at home this season, Derby County became the first side to pick up points at the Coventry Building Society Arena, battling back to earn a 1-1 draw.

Coventry took the lead in the 20th minute with Matt Godden putting the hosts ahead from the penalty spot, in what looked like would be another routine home victory for Coventry after a strong first half.

However, it would be a game of two halves with Derby battling back in the second half with Graeme Shinnie equalising in the 78th minute to send the sold out away end home with something to cheer about.

The draw sees Derby move to five unbeaten (won one, drawn four) as they continue their fight to stay in the league.

Graeme Shinnie’s first goal of the season earns us a vital point as we end Coventry’s 100% home record! 🐏

Dembele strikes late on for Peterborough

Siriki Dembele scored late on to earn his side a 2-1 victory against QPR after coming from behind.

The sides somehow went into the break level, after Peterborough shot stopper David Cornell pulled off a great double save to keep the game scoreless.

However, five minutes into the second half, Ilias Chair opened the scoring after seeing his corner travel all the way into the back of the net.

Peterborough wasn’t behind for long though, with 19-year-old academy graduate Harrison Burrows bringing Posh level, picking up the ball from a blocked shot to finish calmly from close range.

Peterborough would then find joy late on, a quick counter attack saw Siriki Dembele race through on goal to seal the victory for his side in the 91st minute.

After a goalless first half the floodgates opened in the second half after a quick-fire double for Lys Mousset saw him grab two goals in as many minutes, before Ben Osborn put Sheffield United 3-0 up in the 72nd minute.

What looked to be a comfortable victory would then turn nervy as Barnsley pulled two back, with goals from substitutes Devante Cole and Aaron Leya Iseka.

The defeat means Barnsley have now lost six in a row.

West Brom thrashed Bristol City 3-0 as Karlan Grant moved to six goals in as many games.

Fulham shipped four past Nottingham Forest as they ran out 4-0 winners, remaining in second place. Aleksandar Mitrovic grabbed a brace to remain the leagues top scorer with 15 goals.

Blackpool beat Preston 2-0 in a big Lancashire grudge match, while there were wins for Luton, Milwall, Blackburn and Birmingham.