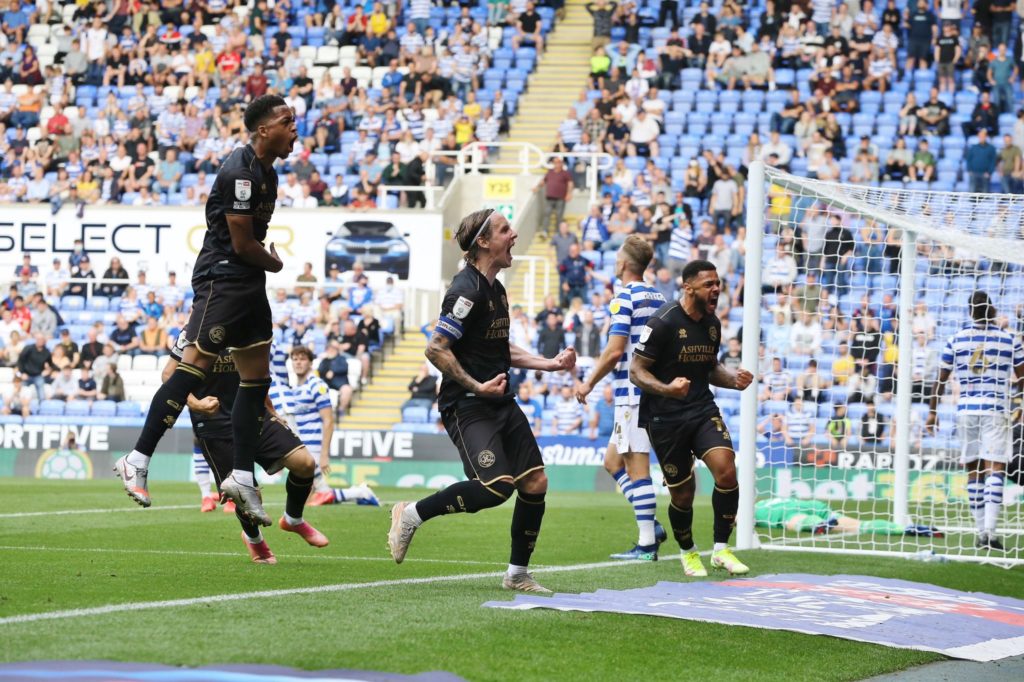 Fulham visited the Lancashire seaside this weekend full of confidence after only dropping two points in their opening five games.

However, it was Neil Critchley’s Blackpool who came away all smiles with the Seasiders grabbing their first league win of the season.

Fulham piled on the pressure in the first half with Josh Onomah finding Ivan Cavaleiro but he could only fire his shot over the crossbar.

The home crowd were in fine voice all afternoon and their efforts were rewarded when Josh Bowler scythed his way through the Fulham defence before firing a low shot past Gazzaniga.

The goal didn’t change the pattern of play too much as Fulham continued to get the ball in to good areas but when presented with opportunities the visitors were rather wasteful.

Blackpool came away deserved 1-0 winners. An impressive three points and a clean sheet which Critchley will be very keen to build on.

Despite a John Swift hat-trick, it wasn’t enough for Reading to take home all three points. Swift managed a single goal in all of last season and had trebled his tally with thirteen minutes to go.

It seemed as if Reading would go on and seal their second win of the season from this position.

However it was Queens Park Rangers who had the last laugh. Firstly, Andre Gray pulled them back within one then it was Stefan Johansen rescuing the draw in stoppage time with the final score at 3-3.

The points were shared at the Hawthorns this weekend but with Fulham losing away at Blackpool, a draw was all that was needed to send West Bromwich Albion top of the table.

It was a tale of two goalkeepers with Sam Johnstone at the other end sparing Semi Ajayi’s blushes on a couple of ocassions with loose back passes.

Kyle Bartley did put the Baggies in front four minutes into the second half but they were pegged back just six minutes later when Daniel Ballard equalised.

In the end 1-1 was a fair result and Valerien Ismael’s men remain unbeaten.

Sundays Championship fixture saw Cardiff City travel to Nottingham Forest with Chris Hughton’s side the only side not to register a win yet this season.

The Reds fall to defeat at The City Ground

Things started well for Forest with Lewis Grabban netting a first half goal and putting them ahead at the break.

However, Mick McCarthy introduced substitute Rubin Colwill early in the second half and it was his double that sent the Bluebirds back to South Wales with all three points.

This result leaves Forest rooted to the bottom of the table after their worst start to a season in 108 years.

This result certainly has put Blades fans’ minds at ease and relieved some of the early pressure on manager Slavisa Jokanovic.

The rest of the action

Luke Berry scored a 98th minute equaliser to snatch a 2-2 draw for Luton at Ewood Park.

Unreal scenes as the composed @LukeDBerry nets his second of the game in STOPPAGE TIME! 💪

A strong first half display saw Blackburn Rovers go 2-0 up at the break courtesy of goals from Tyrhys Dolan and Harry Pickering.

Things might have been different however had Blackburn captain Darragh Lenihan saw red in a reckless challenge which forced Luton’s Allan Campbell off with injury. A lucky escape for Lenihan with the skipper receiving only a yellow card.

Ben Brereton Diaz could have sealed the victory if his second half shot hadn’t cannoned off the woodwork but it was Luton who fought back through a Luke Berry double. His second goal coming in the eighth minute of added time.

The game at Ewood Park finished 2-2 in what Luton manager, Nathan Jones described as a ‘wonderful point’.

The Friday night fixture of game week six saw Birmingham City take on Wayne Rooney’s Derby County. Despite Derby having plenty of possession of the ball, it was Birmingham who came out on top 2-0 with Troy Deeney getting his first minutes in a City shirt.

Mark Robins’ Coventry City continued their impressive home form this season by making it four wins from four with a 2-0 victory against Middlesbrough. This result leaves Neil Warnock’s side winless since the opening day.

Two in-form sides met at the Bet365 stadium on Saturday with Stoke hosting Huddersfield and it was the home side that came away with all three points after a 2-1 victory. Michael O’Neill’s men find themselves in third place after a positive start to the season.

The spoils were shared at the Liberty Stadium as Hull held Russell Martin’s Swansea to a 0-0 draw. Not quite the entertaining 4-4 draw played out the last time these two sides met.

Finally, Bristol City extend their unwanted winless home run to 12 games as they were held by Preston in a goalless draw.